William was a first cousin to David Arnold, who lived close to him in North Street.

William’s birth was registered in mid 1887, and he was baptised at St John sub Castro on 02/07/1887, the eldest son of seven children born to William John and Millicent Arnold, nee Standen. They were living at 10 New Road at the time. In 1891 the family, which now included William’s sister Gertrude, were living at 25 North Street. William’s father was an iron moulder at the foundry. He had been born in Lewes but Millicent came from Maresfield, although later censuses suggest she may actually have been from Nutley.
In 1901 they were still living in the same house and William was listed as a house boy, domestic. He now had two sisters and a brother. In 1904, when he attested into the militia having been called up for a period of six years, he was working for Mr Langbridge as a shop porter. He gave his age as 18 years and 2 months suggesting a birth date in February 1886, which conflicts with his registered birth year. It is possible he ‘enhanced’ his age by a year. He had a confident signature suggesting a good education. He gave his address as 33 North Street and the 1911 census also lists the family there. He was now working as a gardener. 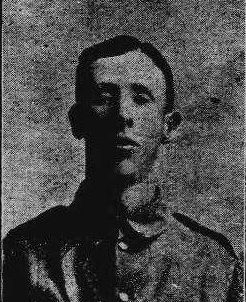 William, from the Sussex Agricultural Express

William attested in Brighton into the 3rd (Special Reserve) Battalion the Royal Sussex Regiment as a private on 25/04/1904 and was numbered 9287. He said he had previously been in the 1st Sussex, however he is only credited with 70 days service with the 3rd Battalion. His wartime army papers are not available to view, but a newspaper article printed in the Sussex Agricultural Express in February 1915 states that he was called up to the 2nd Battalion on 05/08/1914 and was sent overseas soon afterwards. William was numbered L/7961. The ‘L’ indicates that this was an enlistment as a regular soldier, not just for wartime service.

His Medal Roll Index Card shows that he in fact entered France on 12/08/1914. This would suggest that he had remained in the local militia and thus accrued some military expertise. Regimental histories state that the 2nd Battalion was formed at Woking at the beginning of August 1914, with reservists joining on 6th. Following training they were sent overseas by the end of the month and served on the Western Front throughout the war.

William, writing to his sister in early 1915, recounted his actions so far. Not long after arriving in France he was invalided back to the UK suffering from sunstroke. He had returned to the front by November and had a lucky escape when a bullet passed through his hat without causing any injury. Christmas 1914 had also not been without incident. He left the trenches on Christmas Eve, having been up to his waist in water. He and five colleagues helped to free a man stuck in the mud, then they walked four miles to find a farmhouse where they lit a fire to defrost their clothes which were frozen stiff.

Back in the trenches on 25/01/1915 he was hit by a bullet that passed through the muscle of his arm, missing the bone. Several men were killed in that attack but William and the other wounded were taken to the 8th General Hospital at Rouen. He recovered and again returned to the front which had by then moved further North-East towards Bethune. William was injured in the Battle for Aubers which took place on 9th/10th May 1915. The extent of his injuries are not known but he died from his wounds on 12/05/1915.

He is buried in the Lillers Communal cemetery in plot III A 35. He was entitled to the War and Victory Medals and the 1914 Star, which were sent to his father as next of kin. He is listed on both the St John sub Castro Memorial and the Lewes town Memorial and recorded in the Royal Sussex Regiment Roll of Honour held in Chichester Cathedral.