Edgar was born in Lewes in late 1894, the middle son of James Isidore and Mary Jane Uridge, nee Martin. His youngest brother died very shortly after his birth. James had a farming background and in 1901 described himself as a retired farmer and corn dealer. The family had moved to ‘Downside’ King Henry’s Road. They remained living there in 1911 but Edgar was listed as visiting Windlesham House School for Boys in Brighton. 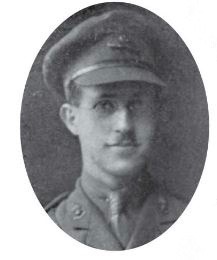 Edgar was educated at Brighton College (Chichester House), leaving in 1914. From there he became a private in the OTC at the Inns of Court and the following year began officer training at the RFA cadet school in Exeter.

He was commissioned on 10/09/1916 as a 2nd Lieutenant in the Special Reserve of Officers. This was recorded in The London Gazette Supplement of 23rd October 1916.

He entered France on 22/02/1917 and was attached to            A Battery of the 147th Brigade RFA . The brigade war diary records his arrival and attachment on 06/03/1917.
At that date 147 Brigade were based at Morlancourt and operated in support of other regiments laying down heavy artillery rounds. The weather during March was extremely cold with snow on the ground.

Edgar was seconded for staff work at the brigade HQ and at the beginning of May was sent on a two week course in gunnery at the 1st Army Artillery school. This was one of a number of field training units set up by the BEF during WW1. Edgar’s return to the brigade is not noted in the war diary but it is known that the course lasted for two weeks.
By now the battalion had moved to Les Brebis and bombardments continued. They seem to have been trying out aeroplane reconnaissance and smoke shells. 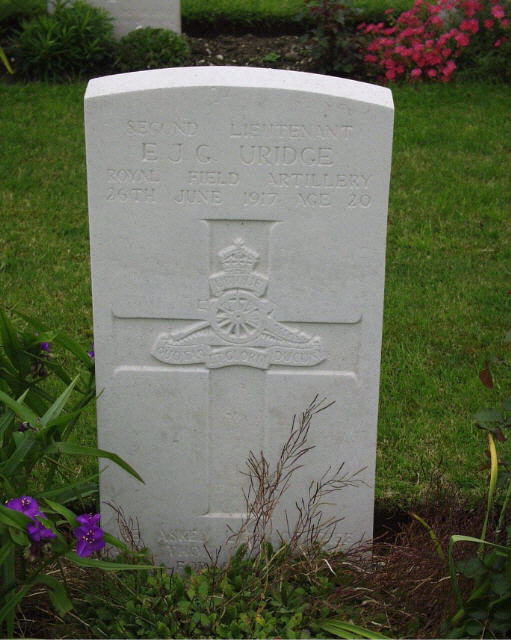 The beginning of June was relatively quiet and activities were organised for the men, including a horse show. The diary then records the following entry on 26/06/1017:
‘A/147 was shelled in the afternoon and the evening. 2nd Lt EJG Uridge … and 26510 Gnr. Arries… killed in battery. Signal dugout at about 10 pm. Buried in Maroc Cemetery …’
The CWGC records that Edgar and Gunner Arries are buried in adjacent graves in plots II E 12 and 13.

Edgar was entitled to the War and Victory Medals which were requested by, and sent to, his father who had also served during the war, in the RAMC. Edgar is remembered locally on the St John sub Castro Memorial, the St Anne’s Memorial and the Lewes town Memorial. He is also listed on the Royal Artillery roll of honour and the roll of honour at Brighton College.