Alfred was born in Lewes and baptised at St John sub Castro on 07/08/1892, the son of Alfred and Harriett Rickson, nee Letchford. Alfred was a twin with Albert, and Harriett died soon after their birth. At the time the family were living in Spring Gardens and Albert snr was a labourer in the chalk pits.
Things were clearly very difficult for Alfred snr. By 1901 he was boarding in South Malling and working as a labourer at the gas house. The family were split up. Four of Alfred’s sisters were working locally and Alfred, with Albert, Frederick and Louise were in the Union Workhouse in St Anne’s.
Despite being split up the family kept in touch with each other. After Alfred’s death all the family were listed by name to receive part of his war gratuity.

By 1911 Alfred was working in London. He was listed as a kitchen boy, living in Gerrard Street in Westminster. Also there were people connected with a billiards club, and on his enlistment papers Alfred said he was a billiard marker. 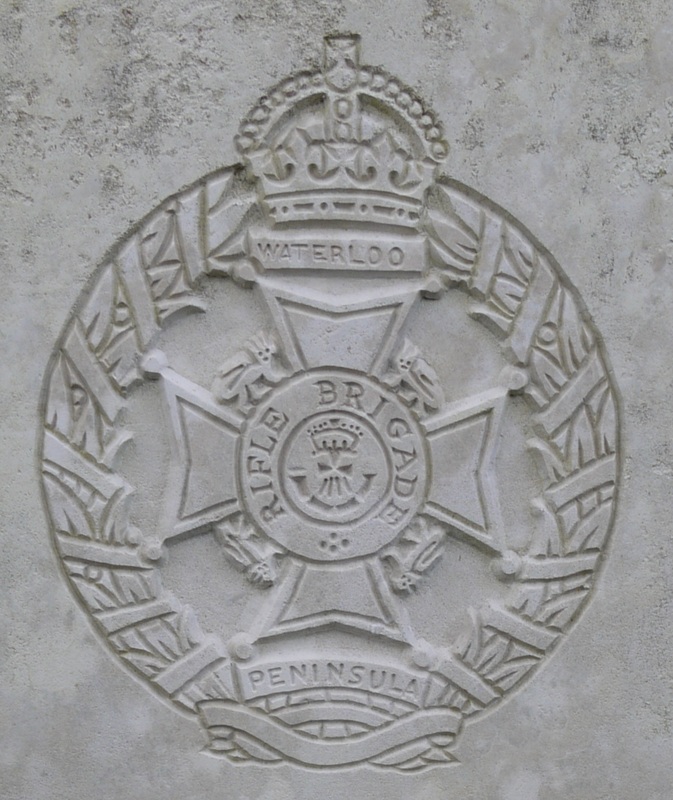 Badge of the Rifle Brigade
as depicted on a CWGC headstone

Alfred enlisted in the Rifle Brigade on 02/06/1915 giving his address at that time as 14 Archer Street, Soho. He gave his father’s address as 48 Lancaster Road. Alfred was numbered S/12604 and placed in the 11th Battalion, which formed part of the 37th Division. The suffix ‘S’ indicating that this was a service battalion.
Although Alfred’s army papers are available to view they form part of the ‘burnt documents’ and are badly water damaged making some pages impossible to read. His medal roll index card indicates that he landed in France on 01/12/1915.
Alfred was involved in fierce fighting throughout his time in France, on the Somme, at Arras, Ypres and Passchendaele in particular.

In 1918 the Germans launched their Spring Offensive. They crossed the Somme at Ham and recaptured the town, establishing their own field hospital and cemeteries. It is not known how or when Alfred was captured and injured but it has been recorded that as a POW he was a patient in the German hospital at Ham suffering from a gunshot wound to the abdomen, from which he died on 07/06/1918.

He was initially buried in one of the German cemeteries with his name inscribed on a cross as ‘Reisson’. Examination of the official German list in 1919 identified him and confirmed his date of death. He was exhumed and reburied, with honour, in the Ham British Cemetery at Muille-Villette in plot II E 3.

George was entitled to the 1915 Star and the War and Victory medals. These were sent to his sister Edith who had married and was living in Edward Street. His eldest brother George acknowledged receipt of them since his father had died in 1918.
When Lewes council were collecting names for inclusion on the Lewes War Memorial his sister Louisa completed the form. She was living in Malling Street. George is also remembered on the St John sub Castro Memorial.