George was born and brought up in Aylesbury, the eldest surviving son of William Henry and Emma Spittle, nee Parker. He was born on 20/04/1887 and his father was a domestic gardener. By 1891 the family were living at 10 Brook Row, Walton. He attended St John’s C of E Primary school, Walton, starting there aged 6 on 21/08/1893. His sister, who was 2 years older than him, started at the same time.

The family were still living in Brook Row in 1901, by which time George had become an errand boy. He was later apprenticed to G T de Fraine and Company as a compositor. They produced the Buckinghamshire Herald, and by 1911 he was listed on the census as a compositor and painter. The family, which had grown in number, had moved to 10 Brookside Terrace, High Bridge Walk in Aylesbury and this was to remain the family home. The picture below shows George at his sister’s wedding in June 1911. 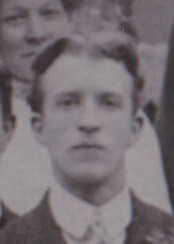 George was married the following year, at Bicester, to Mary Hannah McGowan. She was known in the family as Nancy. George took on a job as a compositor at Farncombe and Co in Lewes and he and Mary moved to 3 Toronto Terrace. They do not seem to have had any children.

George took an active interest in the sporting life in Lewes. He played cricket for Offham in the 1913, 1914 and 1915 seasons, billiards for the St Anne’s social club in 1916, and was a keen runner.

In early 1916 he received his call-up papers and Farncombe and Co appealed, unsuccessfully, on his behalf. His army papers are no longer available but from other sources it seems likely that he enlisted in Lewes in 1916. He was originally placed in the 8th Battalion the West Kent Regiment and numbered 16816. After initial training he would have been sent overseas.

At some point in his service he was transferred to the 4th, and later the 17th Battalion the Middlesex Regiment. He was re-numbered G/40978, the ‘G’ indicating that this was a general service battalion. The 17th Battalion formed part of the 6th Brigade of the 2nd Division.

George was injured twice during his time overseas. He returned to the front on 23/04/1917 but was reported missing, and later presumed killed in action on 28/04/1917 while fighting on the Somme. He has no known grave.

George is remembered on the Arras Memorial in bay 7, on the St John sub Castro Memorial, the Lewes War Memorial and the War Memorial in Aylesbury. He was entitled to the War and Victory medals which were sent to Mary along with his effects.

During the war the Imperial War Museum began collecting photographs and biographical details of men who had died. These were sent in by family members and include letters, photographs and written notes. This was eventually printed as a ‘Bond of Sacrifice’. There is a brief entry for George which you may be able to access on this link: https://www.iwm.org.uk/collections/item/object/205388992