Spelling of Unsted. The St John sub Castro Memorial has it as Unstead, the Lewes War Memorial also has it as Unstead. Both spellings have been found while researching this man but most official records have Unsted.

Edward was born in Beddingham in late 1894, the son of Edward Henry and Emma Unsted, nee Kemsley.
‘Mercer’ was a Kemsley family name.
Edward’s father worked for the railway as a clerk and sometime ticket collector. Edward’s sister had been born in Glynde suggesting the Unsteds are likely to have moved with his father’s job.
Edward Henry died at the young age of 31 in February 1896 and his mother remarried two years later. Henry Robinson was a railway goods foreman so could well have known Edward Henry.

In 1901 the Robinson family were living in part of Station House on Friar’s Walk. By 1911 Henry had retired from the railway and was running the Snowdrop Inn. Edward Mercer was listed as a fish hawker working on his own initiative, aged 16.

Edward was called up in 1916 and enlisted in the 34th Battalion, the Royal Fusiliers. This was formed in Falmer in May 1916 and mobilised just a month later and sent to France. This might seem almost indecent haste with little time for training, however, this battalion was a labour battalion supplying uniformed manpower rather than fighting men.

Edward was numbered 54018 and was sent to Rouen to unload the shipping docked there. Rouen was a base supply depot and the centre for the military hospitals throughout the war. Through traffic of all sorts was considerable, comprising goods and equipment arriving and casualties leaving. 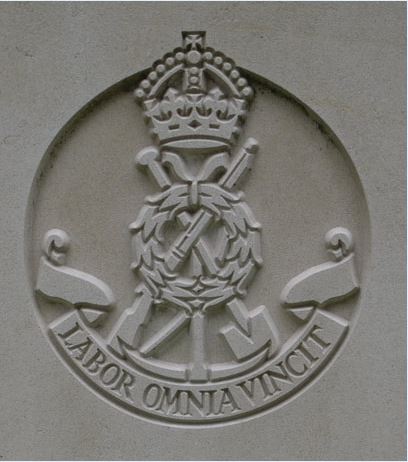 Badge of the Labour Corps
as depicted in a CWGC headstone

During 1917 it was decided to rationalise the various labour battalions and the Labour Corps was formed. The 34th Battalion of the Royal Fusiliers was split into two groups of 600 men, and Edward’s section became the 101st Battalion, the Labour Corps. He was re-numbered 60501 but his work load remained almost unchanged.
Most of the records for the Labour Corps were destroyed in the incendiary attack on the repository during WW2 and almost none survive. The Corps were also not required to keep war diaries.

It is known that Edward died on 17/05/1918 but the circumstances of his death are not known. One record suggests he died in action, while another suggests he died of wounds. Both of these seem unlikely as Rouen was a relatively safe place.

Edward is buried in the St Sever Communal Cemetery Extension in plot Q II K 6.
In row K, of the 24 graves 9 are from the 101st battalion and all died the same day. From researching their records it would seem that most suffered gas inhalation. It was reported in the local Lewes paper that Edward’s name had appeared on an ‘Injured List’ so the most likely cause of his death is an accident when unloading.

Edward was entitled to the War and Victory medals which, along with his pension entitlement, were sent to his mother, who had been widowed for the second time and was living at 9 Mount Pleasant Place. His effects were sent to his sister.

John is additionally remembered on the St John sub Castro Memorial and the Lewes War Memorial.