Edward was born in Lewes in late 1895 and baptised at St John sub Castro on 05/01/1896, the son of Edward Richard and Emily Eliza Louise Wilkins, nee Creasey. At the time Edward and Emily were living at 35 Paddock Road and Edward was listed as a jockey. He had served his apprenticeship with James Prince the horse trainer.
Things did not work out as a jockey as by 1901 Edward snr. had moved to work at the iron foundry and the family moved ever closer to the works. In 1891 they were still in Paddock Road but by 1901 had moved to Lancaster Street and by 1911 to Wellington Street.
Edward jnr. was listed as a general printer’s help in 1911, working for W E Baxter and Co. They had started the Sussex Agricultural Express, and Edward went on to work as a machinist producing the paper.

Edward’s army papers are not available to view but from other sources we can find out quite a bit about his wartime service. 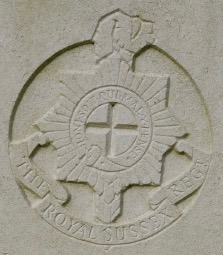 He joined the 1/6th Battalion the Royal Sussex Regiment, referred to as the Cyclists’ Battalion, and was numbered 559. This number relates to an enlistment in either late August or early September 1914. This was a TF battalion with its headquarters in Brighton. They remained in Britain throughout the war; however in July 1916 they moved to St Leonards and became part of the General Reserve. By March 1917 they were based in Folkestone.

Edward was posted to the 7th Battalion RSR and renumbered G/17507. This number falls within a batch of numbers issued in April 1917.

At the time the 7th Battalion was based in the Arras area and the trenches at Monchy. Their war diary notes that on 08/06/1917 a draft of five officers and thirty one other ranks arrived. This is the only diary entry showing men arriving so it is a reasonable assumption that Edward was amongst them. He was thrown straight into trench warfare and came under shellfire. However the rest of June was relatively quiet and spent in billets in Arras.

The bombardments restarted in July and numbers of casualties are noted in the diary on most days. On 25/07/1917 the enemy launched a concerted attack using gas, flame throwers and artillery fire. Ninety one other ranks were lost that day, including Edward.

Edward is buried in the Monchy British Cemetery in plot I C 25. He was entitled to the War and Victory medals. His obituary in the local paper refers to a letter from his commanding officer saying he was a cheerful man and an excellent Lewis gunner.

Edward is remembered on the St John sub Castro Memorial, the Lewes War Memorial and the Roll of Honour of the RSR in Chichester Cathedral.