John Edward, known as Jack, was born in Southsea with his birth registered on Portsea Island in the first quarter of 1890. His parents were John Thomas and Sophia Clark, nee Jones. He was their second son. John Thomas was an agent for the Prudential Assurance Company and between 1893 and 1895 the family moved to Lewes when he took up a post as the district superintendent for the company.

By the 1911 census John Edward’s elder brother James had married and moved out of the family home, but the remaining children stayed together, now living at 11 St John’s Terrace. By then John Edward had become a law clerk.

He married Dorothy Winifred Baker at St Anne’s on 10/02/1915 and they moved to 6 Talbot Terrace where a daughter Marie Dorothy was born in mid 1916. 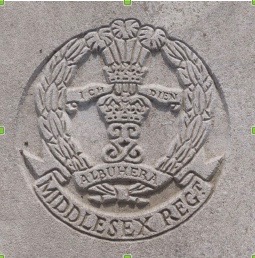 Badge of the Middlesex Regiment
as depicted on a CWGC headstone

John’s army service papers are no longer available to view but we can find some details of John’s wartime service from other sources.
However, this does raise some unanswered queries. John enlisted in early 1915 just before his marriage and was apparently placed in the reserves. He was eventually placed in the 23rd Battalion of the newly formed Duke of Cambridge’s Own (Middlesex) Regiment and numbered G/42738. The ‘G’ denoting that this was a General Service Battalion. It was also known as the 2nd Football Battalion since many of its original recruits were professional footballers.

The query here is that John’s number is not one allocated to the 23rd Battalion, as all theirs began with the suffix F. As John appears to have retained his number and his war medal was allocated from that regiment it is likely, but not certain, that he attested into a different Middlesex Battalion and was transferred before he entered France.

The 23rd Battalion had been raised in London in June 1915 and men were reportedly slow to join. This may also be an indication that John and others were transferred to raise the numbers. They were sent for training in Cranleigh, and in November 1915 they joined the 123rd Brigade, 41st Division at Aldershot and entered France in May 1916. Their base was between Hazebrouch and Bailleul. John was raised to corporal sometime between joining and his death but the date is uncertain. 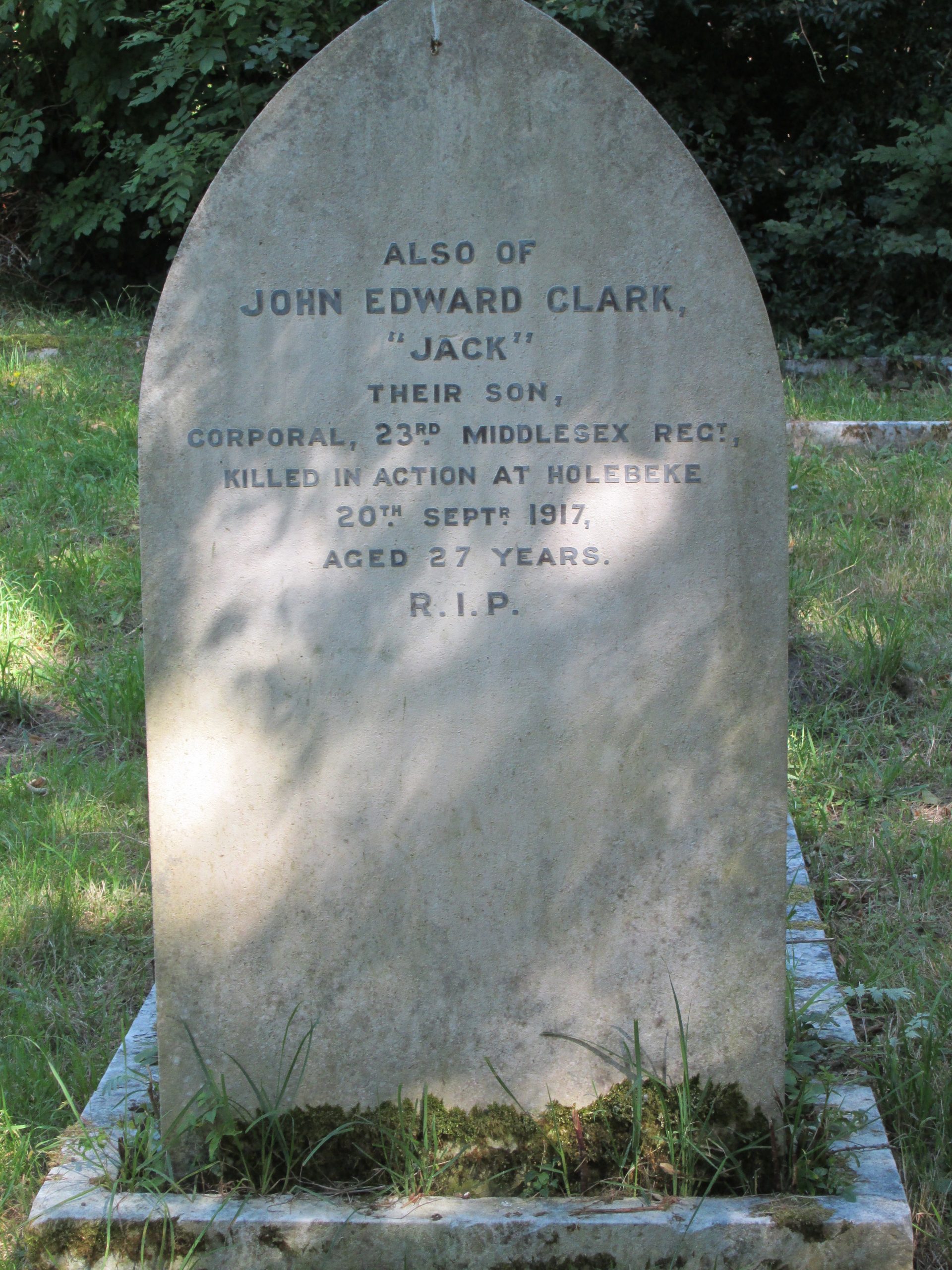 During 1916 his battalion was involved in the battles of Flers-Courcelete, Transloy Ridge and the Somme. Things were just as busy the following year when they took part in the Battles of Messines, Pikers Ridge and the Menin Road. They were also in support of Operation Hush. This was a planned joint naval and army assault on the Flanders beaches and further inland, timed for between July and October 1917.
In the event despite a lot of planning the full attack did not take place – however resistance was fierce. This attack was the first recorded use of mustard gas by the German defences.

John fell at Hollebeke on 20th September 1917 and has no known grave. The battalion war diary records that both the 20th and 21st September saw heavy fighting but with few casualties. Just four other ranks were killed and two reported missing.