Wilfred was born in Lewes on 14/03/1888 while his parents were living in Castle Banks House in the castle precincts. It is known that they attended St John sub Castro. He was the youngest of seven children and the third son of John Clay and Charlotte Agnes Lucas nee de St Croix.
John was a lime, coal and cement merchant having a long association with Rickman and Co. with whom he was a partner. He was well respected within the town in political and freemasonry circles and involved in numerous public groups within Lewes. His death from Bright’s disease, aged 58, in January 1893 caused shock throughout the town.
Wilfred’s mother Charlotte was the daughter of Rev. W de St Croix, the vicar of Glynde. Charlotte and the family continued to live in Castle Banks House after John’s death. Wilfred attended Junior King’s school in Canterbury from 1898 and was listed there as a boarder at Junior Kings in 1901.
He completed his education at Kings in July 1906 having represented the school at rugby, cricket and fives. His nickname at school was ‘Chubby’. On his return to Lewes he enlisted in the 1st Sussex Yeomanry in 1909. He was also a member of the Priory Cricket Club.

By 1911 both Wilfred and his brother John were listed as land agent’s assistants and still living at home. His brother William was a market gardener in Upton on Severn.
On 20/01/1912 William and Wilfred emigrated, on an unassisted passage, to South Australia. On the ship’s manifesto William said he was a bookkeeper and Wilfred a mechanic. They travelled from Liverpool on the White Star Line’s SS Runic arriving in Melbourne in March. From there they travelled to Adelaide. Wilfred and William worked for Angove’s, a wine producer in Tea Tree Gully and Renmark near Adelaide.
When Wilfred enlisted in Australia in August 1914 he gave his occupation as a Vigneron – a grower of grapes for the wine industry. William gave a similar occupation when he enlisted three years later.

Wilfred enlisted in the Australian Imperial Force on 29/08/1914 at Morphetvale. He was placed in ‘B’ squad of the 3rd Light Horse Artillery and numbered 314. This was a mounted infantry brigade. After initial training he embarked on Transport 17 Port Lincoln from Adelaide on 22/10/1914 and arrived in Egypt on 10/12/1914.
Training was undertaken at Maadi camp before he was transferred to Heliopolis on the outskirts of Cairo towards the end of January 1915. He was injured before his brigade was posted to Gallipoli. Although the details of his injuries are not available he was apparently invalided to the UK. There is a note on his papers that say he suffered from laryngitis in March 1915 and was hospitalised for two days but this does not seem severe enough for him to be sent to the UK. 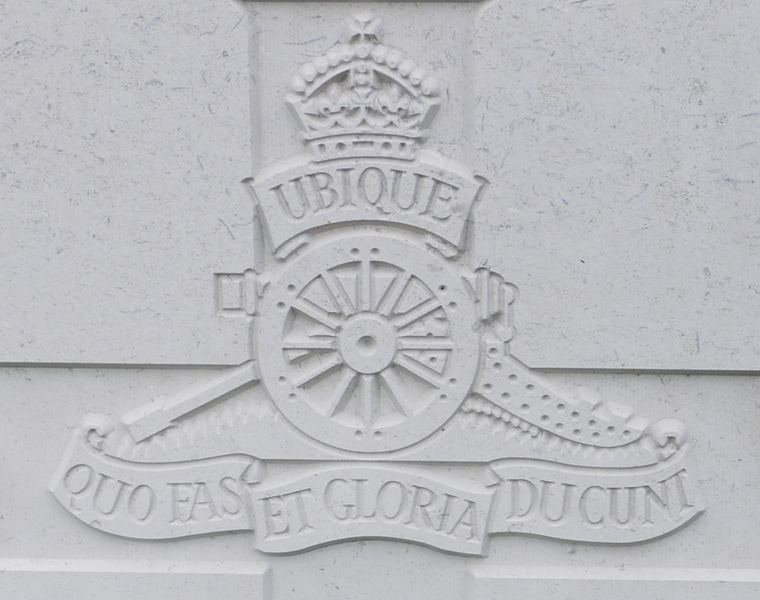 Badge of the Royal Artillery
as depicted on a CWGC headstone

While in Britain he applied for a transfer to the Royal Artillery. He was discharged from the AIF on 23/05/1915 and received a commission as a 2nd Lieutenant in the Royal Field Artillery Special Reserves. The announcement appeared in the London Gazette for 11/06/1915 on page 5724.

Wilfred joined C101 Howitzer Battery and landed in France on 05/09/1915. Following various reorganisations this eventually became D Battery of 100 Howitzer Brigade (D100). They would be in the forefront of the bitter three year campaign undertaken in Salonika as part of the 22nd Division.

They left Marseilles on 23/11/1915 landing in Salonika on 12/12/1915. Their aim was to prevent the Bulgarian forces from joining with the German and Austro-Hungarian forces to attack Serbia. Initial attacks were spread along a 250 mile front and the British troops, lacking the necessary supplies and equipment, were forced to retreat to Greek territory in December 1915.

Conditions were very difficult. The men suffered from frostbite during the winter and malaria during the hot summer months.
Wilfred was reported killed by a stray shell on 23/12/1916 while leaving a telephone post. He is buried in the Karasouli Military cemetery in plot D 893.

Wilfred’s mother received an initial telegram informing her of his death but this was followed by several letters, including those from his commanding officer, the chaplain and several brother officers. He was very well liked for his cheerfulness and devotion to his men.

His death was reported in his local Australian newspaper, the Chronicle, and also in the Sussex Agricultural Express in January 1917. A warm and affectionate appreciation of his life, written by an old boy of King’s School was printed in the Times on 05/01/1917.
He is remembered on the Adelaide National War Memorial, the Tea Tree Gully Memorial and the Morphetvale Memorial in South Australia.

In England he is remembered in the Royal Artillery Commemoration Book, the King’s School Roll of Honour, the St John sub Castro Memorial and the Lewes War Memorial. His brother William who also served in the AIF returned safely.