William was born in mid 1884 in Newick, the eldest child of Henry John and Maria Wren, nee Hicks. The family moved to Lewes shortly after William’s birth, and his sister was born there in 1886. In 1891 the family were living at 37 New Road. Henry was a carpenter and William no doubt learnt his trade from his father as by 1901 he was also listed as a carpenter. The family had moved to 18 New Road.

William married Harriet Amelia Upton in early 1907 and they moved to 5 Eastport Lane, near the station, as William was working as a carpenter in the Engineer’s department of the London Brighton and South Coast Railway. By 1911 they had two children. Two more children had been born by 1915.

William had been a member of the Royal Sussex Regiment Militia and on 05/10/1914 he enlisted as a pioneer, later sapper, in the Sussex Fortress Reserve of the Royal Engineers. He was numbered 174. His skills as a carpenter were examined and noted on his army papers. He was originally placed in the 1st Company, a TF company intended for coastal defence.

Following the agreement of virtually all the company, including William, to serve overseas their role changed. They boarded the Empress of India at Southampton and travelled to Le Havre, entering France on 20/03/1915 and moving to Etaples. Their first objective was to build accommodation for the troops that were arriving. Later they switched to building hospitals, roads, and other infrastructure. William’s skills were made use of and a further examination in May 1915 notes that he was a supervising carpenter. There was a huge need for labour of this type, and many of the regiments had labour corps attached to them. In theory at least, if necessary, they were also infantry men and available for combat. In William’s case he seems to have been permanently stationed at Etaples, at least until July 1916.

Very few Labour Corps papers survive; they were also not required to produce a war diary, so tracing William’s movements is not easy. His papers show that he was still in Etaples in March and June 1916; some of his uniform went AWOL, and he later missed roll call. For these ‘offences’ he was docked pay. In July 1916 he was transferred to the 2/1 Battalion Labour Corps and it seems likely, but not certain, that he was re-numbered, 545088.
His later obituary in the local paper suggests that he was injured by a bomb explosion around this date. Assuming his injuries were severe he would have been returned home and this would tie up with his joining first the 434th and later the 681st Agricultural Companies. Although, unusually, William’s papers are available they are burnt and badly water damaged and it is not possible to be absolutely certain.

The Agricultural Companies were mainly based in the UK and made up from men who were no longer fit for front line duties. Each company had a headquarters and the men would work on farms involved in food production relatively local to the HQ, although they could also be working in a completely different area more local to their home. Company records are few and far between. It is possible that 681 Company was based in Chichester. It also seems possible that William was re-numbered 430436 when he joined this particular company. 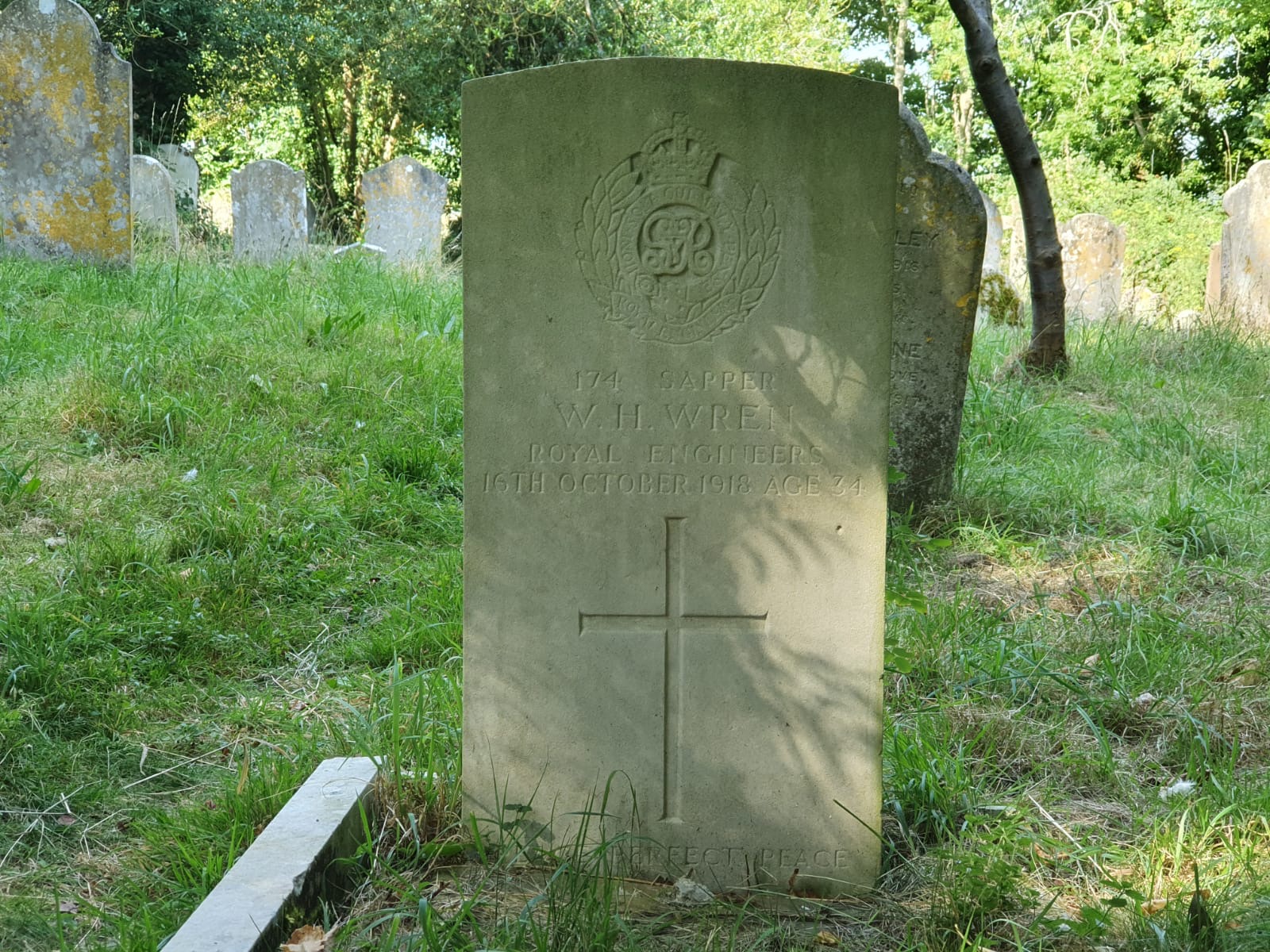 The only certainty is that William contracted ‘flu while still in the army. He was taken to the 2nd Eastern General Hospital in Dyke Road Brighton on 11/10/1918. This hospital occupied the requisitioned Brighton Hove and Sussex Grammar School buildings (now BASVIC). The ‘flu turned to pneumonia and William died on 16/10/1918. In a letter from Harriet in his papers she says that when he went to hospital he was wearing his own boots, not army issue ones. This might suggest that he had been living at home while working locally.

Harriet was then living at 25 North Street. William was buried in the churchyard of St John sub Castro on 21/10/1918 with men from the RSR acting as coffin bearers. He has a CWGC headstone.

William was entitled to the the War and Victory medals and the 1915 Star. He is remembered on the St John sub Castro Memorial and the Lewes War Memorial.