Albert was born in Newhaven, probably in 1872, and baptised there on 27/10/1872, with his birth registered in the Lewes district in Q2 1872. There is slight uncertainty over his date of birth as one sheet on his army papers and the National Obituary Index gives him a date of birth of 1868.
His parents were Robert and Jane Fuller, nee Hamper. They had married in Newhaven in May 1869 but by 1871 were living in the Union workhouse in Newhaven. Jane was 11 years older than Robert and came from Rottingdean. Robert had been born in Burwash.
Listed next after Robert and Jane was 7 year old Thomas W B (William Bulman) Hamper who was probably related to Jane. There is circumstantial evidence to suggest he may have been her son from a previous relationship however this is not proved.

Albert had an elder sister Emma born in 1870 and a younger sister Annie born in 1874. Both were born in Newhaven. By 1881 they were all living in the workhouse in Newhaven with Jane described as an imbecile. There is no sign of Robert and further definite traces of him have not so far been found.

By 1891 Albert was working as a farm labourer in Piddinghoe and boarding in one of the farm cottages attached to Deakes Farm. It would seem likely that he was also working at Deakes Farm. 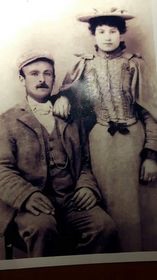 On 25/12/1896 he married Abigail Jane Duckmanton, known as Jane or Jennie, at St Stephen the Martyr, Marylebone. How Albert and Jane met is not known. Jane was three years younger than him and had been baptised at Barcombe, although all census entries for her say that she was born in London. Her family were certainly in London by 1879 as her siblings were born there. Her father Frederick was a saddle and harness maker. The marriage was after banns with both Albert and Jane saying they were ‘of this parish’ and giving their address as 81 Henry Street, which was Jane’s family home.

Following their marriage Albert and Jane moved to Sussex and their eldest daughter Ada Helen Jane was born on 04/05/1900 in Stoneham. On the1901 census Albert was listed as a general labourer and the growing family were then living at 10 York Street, Lewes.
A son, Ernest William, was born on 04/06/1902 and another son, John George Arthur, on 12/09/1906. By 1911 the family had moved to 24 Spring Gardens. Their entry states that there had been 4 children born to the couple of whom one had died. There are too many variables to positively identity this fourth child. A fifth child, Annie Elizabeth, was born on 11/05/1915.

Aged 46, Albert volunteered for the Royal Engineers in London on 20/08/1915. He claimed to have previously served 3 years with the Royal Sussex Militia. He said he had previously been employed as a navvy by M Calpevil contractors of London. Albert’s army papers are amongst the burnt documents damaged by an incendiary hit on the repository during WW2. Not only are pieces missing but the surviving pieces also have water damage making parts of them difficult to read.
Albert’s enlistment in London and his apparently working there is interesting as he gives his home address as 18 Spring Gardens, Lewes. He was numbered 116706 and classed as a gunner. He was embodied almost immediately suggesting that he certainly had army experience.

He arrived in France on 28/08/1915 and remained there for three years, almost to the day. The role of the Royal Engineers during WW1 was very varied from tunnelling to bridge building, road making to, in some cases, helping the local farmers with their harvest! Exactly what Albert was involved in is not possible to determine from the papers currently available. 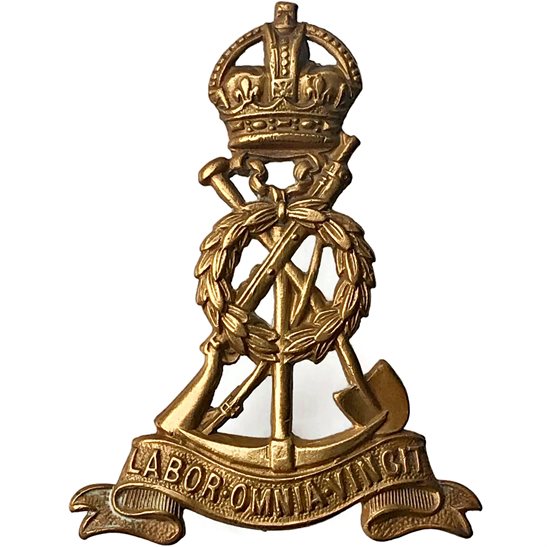 He was transferred to the Labour Corps at its formation on 01/03/1917. The role of the Labour Corps was similar to what he had been doing with the Royal Engineers but now also included salvage, carrying the wounded and burying the dead.
Albert was placed in the 704th Company and renumbered 292094. He was given leave on 02/02/1918 and subsequently spent time at an army rest camp at St Valery from 12/05/1918 – 18/06/1918 when he rejoined his unit.
This was for just two months as he was admitted to a field hospital on 24/08/1918. He arrived back in the UK on 25/08/1918 and was transferred via Fovant in Wiltshire to the Sobraon Military hospital in Colchester. This was a specialist heart hospital set up at Sobraon barracks.
Albert was suffering from loss of breath, sweating and general chest pain and was eventually diagnosed as having endocarditis, or inflammation of the inner lining of the heart.

At a hospital board assessment he was listed as 100% disabled as a result of his service. The infection had probably been developing over the last six months of his service in France and in many other cases was the result of being gassed.
Even today the mortality rate ranges from 20% to 40% and death usually occurs between 6 weeks and 1 year. In Albert’s case he was confined to bed.
For whatever reason he was discharged from hospital on 19/11/1918. His papers say that he needed an attendant during his travel, transport to his home and full time care once at home. These papers clearly state that Albert died on 21/11/1918 however his pension papers give his date of death as 21/12/1918.
Albert was buried in St John sub Castro churchyard although the location of his grave is not now known. He is listed on the Lewes War Memorial but not on the St John sub Castro Memorial.

Following his medical board hearing and subsequent discharge he was immediately awarded a pension of 27/6d (£1 12½p) per week, to be reviewed in 26 weeks. This would have ceased on his death. Jane had to apply for a pension for herself and the children. Jane had to send details of herself, her marriage and the dates of birth of the children to the pension office. These had to be corroborated by a person in authority who knew the family. In most cases this would have been the local minister of religion. In Jane’s case it was Mr Green, the Baptist minister who lived in North Street.

While Jane and the children lived in St John sub Castro parish the choice of the Baptist minister might suggest that the family attended the Baptist church, or possibly that she had converted. Jane was awarded an initial pension for herself and the two youngest children in September 1919. By then the two eldest children would have been considered capable of supporting themselves. Ada was 19 and Ernest 17. Jane was awarded a total of 44/2d (£1.22p) per week. When the money actually started arriving is not known but the form signed by Mr Green was dated 14/07/1921.

Albert was entitled to the 1915 Star, as he had volunteered before conscription came in, as well as the War and Victory medals. These were sent to Jane. There is a touching comment from Jane on the returned form saying she is ‘very proud of these medals’.

Jane remained living at 18 Spring Gardens and died in Lewes at the beginning of 1965.