Wilfred was born in Lewes in mid 1890, the youngest son of John Cave and Ann Harland, nee Jeffrey. The family were living at 18 St John’s Terrace at the time. Wilfred’s father was a bank clerk. The 1891 and 1901 census show the family still living at 18 St John’s Terrace. John Cave Harland died in 1906 and by 1911 Wilfred was living and working in Eastbourne as a drapery assistant.

Wilfred’s army service papers are no longer available, and it is not known at this stage when Wilfred enlisted. He is however known to have enlisted in Lewes, initially into the Army Ordnance Corps as private number 012463. During WW1 the AOC, renamed the Royal Army Ordnance Corps in 1918, were responsible for the supply, repair and maintenance of all military equipment. It is unclear what role Wilfred had, but it would seem likely that he was based in the UK, as he married Ethel Mary Barnfield in Croydon in the third quarter of 1917.
They moved to live with Wilfred’s mother in St John’s Terrace. 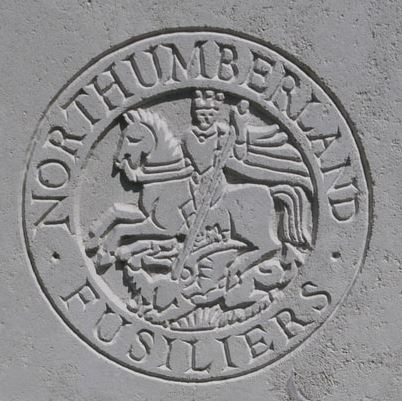 Badge of the Northumberland Fusiliers

At some point Wilfred was transferred to the Northumberland Fusiliers, possibly in France. He was renumbered 59234 and became part of B Company of the 25th Battalion.
This was a ‘Pals’ battalion, one of three called the Tyneside Irish Battalions. They formed part of the 34th Division and were heavily involved in the fighting around Ypres.

Throughout April 1918 the German forces undertook a Spring Offensive with the aim of capturing Ypres and forcing the Allied forces back to the Channel ports. There were many individual battles but overall this became known as the fourth battle of Ypres.

Although the British suffered heavy losses the German offensive was not successful. The Northumberland Fusiliers, as part of the 34th Division, were particularly involved in the battles for Bailleul and Kemmel Ridge.

Wilfred was presumed killed near Croiselles on 21/03/1918 as the 34th Division withdrew in order to reorganise. He has no known grave and is remembered with his colleagues on the Memorial at Arras in Bay 2, stone 9.

Wilfred’s effects were sent to Ethel, who had moved to Battle by 1919. She would also have received his medals but I have been unable to find the record for this.

As a member of an Irish Battalion Wilfred is remembered in the Irish National War Memorial Record Book, in addition to his naming on the St John sub Castro Memorial and the Lewes War Memorial.