Archibald’s surname is spelt as Murdock on the St John sub Castro War Memorial. A handwritten ‘h’ and ‘k’ can look very similar on documents written over 100 years ago and both forms of his name can be found on historical documents. The army consistently spells his name with a ‘k’ but Archibald signed his army papers with an ‘h’, he completed his 1911 census sheet with an ‘h’, his wife also signed for his medals with an ‘h’ and he is listed on the Lewes Post Office Memorial as Murdoch.

Archibald was born in St Leonards in 1881, the eldest son of Archibald James and Elizabeth Ann Murdoch, nee Collins. His father died in 1890 and the 1891 census shows Archibald living with his uncle William in Hastings.

Archibald joined the 3rd Battalion the Royal Sussex Regiment on 10/03/1898 and was numbered 7674. He was allowed to buy himself out on 18/04/1899 as he said he was needed to look after and support his grandfather. After leaving the army he worked for J Crook, cordial manufacturers and Botanical Brewers of Bexhill, and was paid 25/- (£1.25) per week.
This appears to have been a short commitment as he re-enlisted, this time in the 2nd Battalion The East Kent Regiment (The Buffs), on 30/12/1899 and was numbered L/6174. The prefix ‘L’ indicates that this was a regular army enlistment. He was later briefly transferred to the 3rd Battalion and then back to the 2nd during 1900.
All Archibald’s army papers are among the ‘burnt documents’ damaged by an incendiary hit on the repository during WW2. His papers are severely damaged by both fire and water and very difficult to decipher.

Archibald served in South Africa during the 2nd Boer War, returning home on the SS St Andrew and arriving in the UK on 29/12/1902.
As a result of his service he was entitled to the 1901 and 1902 campaign medals with clasps for Cape Colony, Orange Free State, Transvaal, and what looks like the King’s South Africa clasp. As with many of the returning men he was transferred to the reserves, serving until the end of 1911 and leaving as a lance corporal.
This completed his 12 year term of service. He cited his grandfather as his next of kin.

Whether he was recalled as a reservist or re-enlisted is unclear but he reappears in the East Kent’s from January 1912, apparently in the 1st Battalion, but with his original number.
A daughter and son were born in 1912 and 1914. Archibald served at home until 11/03/1915 when he was sent to France as part of the BEF. The papers are not clear and it seems likely that he was injured as he returned to the UK on 27/04/1915, remaining at home until 02/01/1916. The rest of his service time was spent in the field.

Throughout 1916 Archibald was fighting on the Somme with the Buffs, involved at High Wood, Guillemont, Flers-Courcelette, Morval and Le Transloy Ridges. He was made up to Corporal on the first day of the battle at Morval.
It is possible he was injured for a second time as there appear to be entries for periods in field hospitals in June and July 1916.
In 1917 the Buffs were initially at Arras and later at Ypres. Archibald had a month’s leave in February when he returned to the UK. He was made up to Sergeant at the start of the Battle of Vimy Ridge on 09/04/1917. 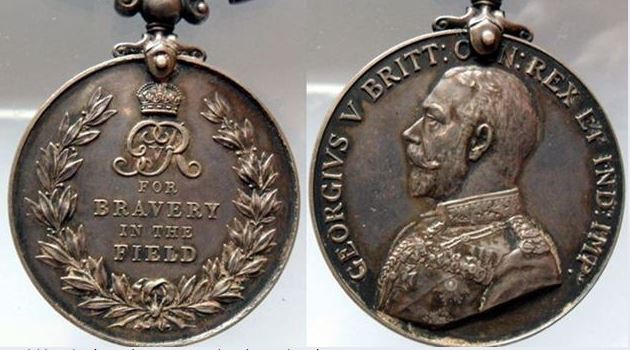 It is not possible to find out exactly where Archibald fought between April and July, but he was awarded the Military Medal on 22/07/1917. This award was published in the London Gazette issue 13131, page 1761 on 23/08/1917, and in the Edinburgh Gazette two days later.

The Military Medal was awarded to non-commissioned officers and men for acts of bravery.
The citation would have been sent to the recipient but few survive in public hands. We therefore do not know what action prompted the award.
The regimental war diaries are held at the National Army Museum and are not currently available for view – they are likely to give more details. 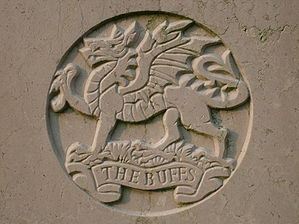 Archibald was killed in action on 12/09/1917 and is buried in the Philosophe British Cemetery in plot I V 32. His name is inscribed in the Buffs’ Book of Remembrance which is held in Canterbury.
He is also remembered on the St John sub Castro Memorial and the Post Office Memorial in Lewes, but he is not listed on the Lewes War Memorial.

Archibald was additionally entitled to the War and Victory medals and the 1914/15 Star. These were sent to Beatrice along with his effects. She had moved to 21 Lancaster Street by the end of the war.