Vernon Frances was born in Sutton on 16/11/1893 and baptised at St Nicholas church on 07/12/1893. His father Stanley Vernon Symondson was a ship broker from London and his mother Jessie Kate Uridge was born in Chailey. Vernon was the eldest of three boys who all went on to have distinguished service careers. 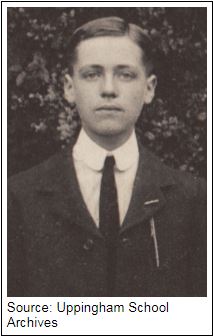 Vernon had a privileged upbringing. In 1901 he and his next youngest brother were staying in Margate with their nurse and by 1911 they were both boarding at Uffingham School. His father had died in 1906 and his mother in 1911.

He entered Sandhurst in 1913 and was posted to the 12th Reserve of Cavalry, attached to the 11th Royal Hussars in 1914. They were based in Aldershot at the time prior to moving to France. Vernon was gazetted as a 2nd Lieutenant in the 13th Battalion the Royal Hussars on 07/07/1914.

This battalion served on the Western Front from December 1914 having returned from India where they had been stationed for the previous ten years. Vernon would have transferred to them in France.

He was injured by a gunshot wound to the right knee and spent 2 days in Millbank Hospital in October 1914 but returned to the front.

He was injured for a second time during 1915 and was returned to the UK being stationed in Aldershot. He was stopped by the police twice for speeding on the same day in early September and somewhat cavalierly said he wasn’t worried about a fine because he could pay it. He was charged with drunken driving in Piccadilly a month later, receiving a hefty fine.

It must be assumed that he returned to the front, but he resigned his commission in August 1916 and joined the Royal Flying Corps.
He announced his engagement to Sybilla (Bella) Morris from Sutton in October 1916 but they never married.

Vernon joined the Royal Naval Air Service on 31/05/1917 and took his flying certificate in Eastbourne on 12/06/1917 flying a Maurice Farman biplane. The picture below right is from his certificate, the one above was taken about ten years earlier. 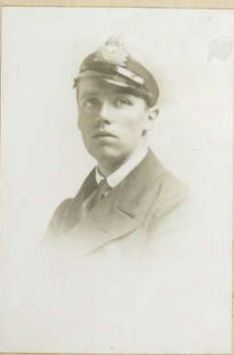 Vernon spent two months at Cranwell but failed to graduate at his first attempt and retook the course coming out as a sub Lieutenant. Other courses followed and he was posted, first to the aircraft carrier HMS Pegasus and later to HMS Furious where he joined 5 Group, 210 Squadron in April 1918.

He was gazetted a full Lieutenant in May. He had recurring trouble with his right knee and spent at least two periods in Haslar hospital for treatment during the summer of 1918.
He was then allocated to the pilots’ pool while still part of 210 Squadron in France. They operated as a fighter squadron flying Sopwith Camels.

On a practice flight on 13/11/1918 near the aerodrome at Cambrai he crashed trying to turn at low speed and spun in.

He is remembered on the Roll of Honour at Uppingham, School, the War Memorial in Bromley, the St John sub Castro Memorial and the Lewes War Memorial.

Vernon’s connection to St John sub Castro is through his mother’s family. In 1911 his aunt Eliza Victoria Uridge lived in King Henry’s Road and his uncle James Isidore Uridge, whose son is also remembered on the Memorial, lived in Prince Edward’s Road.