Arnold and Charles were brothers with Charles the elder by four years; however they are treated alphabetically as that is how they appear on the War Memorial.
Both of them were born in Lewisham, the sons of John Foster and Caroline Howe, nee Presland. Charles was the 10th and Arnold the 12th child of thirteen born to the couple between 1873 and 1897. John Foster Howe was a steam ship broker, running his own business in London.

The family moved to the Lewes area some time after 1911 and at Arnold’s death in 1917 their address was Fairhaven, King Henry’s Road. Following the move to the South coast John Foster Howe had quickly become involved in various local groups, particularly those involved with the Baptist Chapel. He was also a prominent member of the William Blake Society. By the mid 1920’s they had moved to Seaford.

Arnold was baptised at Lewisham on 25/07/1893 and attended Queensmore School up to the age of sixteen, when he entered the family business as a clerk. He was a keen sportsman and also ran both a boys’ brigade and scout troop.
Like his brother he enlisted in the 1/28th London Regiment, also known as the Artist’s Rifles, soon after the outbreak of the war, and was numbered 2950. This number suggests an enlistment in November 1914. He was placed in ‘A’ Company. His papers are no longer available to view but from other sources it is known that he entered France on 27/03/1915 and was promoted to Lance Corporal in France in 1915. He was detailed for metrological observation work. 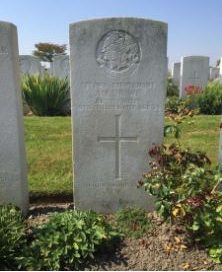 He returned to base in London and was commissioned as a Second Lieutenant having previously spent several months working as Officer in Charge of the physical training and bayonet fighting unit.
He returned to the front line in July 1916. It is uncertain where his unit was engaged but he fell in the Battle for Passchendaele on 30/10/17. It was reported that he was killed by machine gun fire while leading his men. He was initially buried at Langemarck with several of his men.

Following the decision of the Commonwealth War Graves Commission to re-inter those men buried in outlying cemeteries that were very difficult to maintain in an appropriate manner he was exhumed, identified by his disc, and reburied with honour in plot XVIII A 17 of the Poelcappelle British Cemetery.

Arnold was entitled to the 1915 star, and the War and Victory medals. He is listed and remembered in several places. His name is inscribed on the Artist’s Rifles Memorial Roll of Honour, the Penge Congregational Church Memorial inside the church, as well as the Penge War Memorial.

In addition he is remembered locally on the St John sub Castro Memorial but not the Lewes War Memorial.
A family stone in the Hither Green cemetery in Lewisham to four of his younger siblings also includes his name.

Charles was born in Lewisham on 05/01/1889 and remained living at home until his enlistment. He left school aged 15 to study art and was later employed at Goldsmith’s College of Art. He was a skilled artist and was known for his many sketches and watercolours of the South Downs. 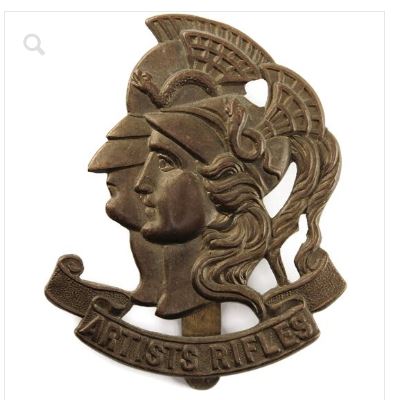 Cap badge of the Artist’s Rifles

The 1911 census records him as a designer, then living at home. Within the family he was known as ‘Ching’. He joined the Artist’s Rifles in September 1914, and was numbered 2754. This number suggests an enlistment in late September.

The Royal Berkshire Regiment was also known as the Princess Charlotte of Wales Regiment. He fought at the Battle of Loos and was killed in action on 01/07/1916. He is buried in Carnoy Military Cemetery in plot Q21.

The inscription on his grave, and that of his brother, reads ‘Amavimus Amamus Amabus’ which translates as ‘We loved, We love, We continue to love’. This is also the inscription on writer Charles Kingsley’s gravestone.

Like his brother Charles, he is remembered in several places. He is included on the Goldsmith’s College of Art Memorial, the Lewisham War Memorial, the family gravestone at Hither Green, as well as the St John sub Castro Memorial, but not the Lewes War Memorial.
Like his brother he was entitled to the 1915 Star and the War and Victory Medals. These, along with his effects, were sent to his father.