David was born in Lewes at the beginning of 1892 with his birth registered in the first quarter of the year. He was the fifth child of seven born to Edward and Matilda Arnold. Edward was a moulder in the iron foundry and the family were living at 26 North Street in 1901 but had moved to 24 North Street by 1911. Matilda was originally from Maresfield and she died in 1915. By 1911 David was working as a draper’s porter for Mr Tickner of Cliffe High Street.

David’s army papers are no longer available to view. Large numbers of army service records were destroyed in an incendiary attack on the repository during WW2. While we cannot be certain of his movements we can learn a lot about his war service from other sources. Prior to the outbreak of war David had been a member of the 5th Cinque Ports Battalion, the Royal Sussex Regiment. The 5th was a Territorial Force which could be called upon in time of war. He was numbered 1623 and this number equates to an enrolment during 1913. David would only have received basic training and undertaken drills as a volunteer. The 5th battalion went through several changes of name. First it became the 2nd Volunteer Battalion, then in September 1915 they were absorbed by the third line battalions and became the 2/5th. On 08/04/1916 they became the 5th Reserve Battalion. They were trained and ready for service wherever required. 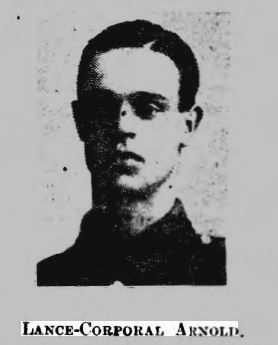 David, as printed in the Sussex Agricultural Express

The 12th Battalion RSR was the 2nd South Downs Battalion and all original recruits had the prefix SD attached to their numbers. They had arrived in France in March 1916. On 30th June 1916 they suffered huge losses at the battle of the Boar’s Head, which has become known as ‘The Day Sussex Died.’ Nearly 20 Officers and over 400 men were either killed, missing or wounded by the end of the day. Although still able to operate as a unit they need more men. During July several drafts of Officers were attached to the battalion but it was not until 12/09/1916 that a draft of 160 men arrived while they were stationed at Auchonvillers. The battalion war diary records their arrival.
David was transferred to the 12th Battalion towards the end of 1916 as his new number G/15786 falls within a batch issued at that time. It is likely that this is when he physically joined the battalion. Periods of fighting were interspersed with training and time in billets and on 09/11/1916 they were at an area called Paisley Dump. The battalion took over the area from the 1/1st Hertfordshire Regiment and spent the next few days improving the front line. Casualties were light however David was killed on 12/11/1916. He was initially buried in the Paisley Avenue Cemetery with his grave marked by a cross. 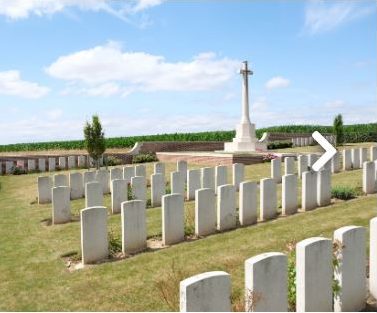 Lonsdale Cemetery. David is buried in the second row from the central pathway, second grave from the left.

After the war the Commonwealth War Graves Commission took the decision that these smaller cemeteries, being hard to maintain in an appropriate manner, should be amalgamated into larger cemeteries. Accordingly approximately 100 men from this particular cemetery were exhumed, identified and re-buried with military honours at Lonsdale Cemetery, Athuille. David is buried in plot VIII B 2 where the cross originally on his grave was also re-erected. This was later superseded by an official CWGC headstone.
David was entitled to the War and Victory medal and these were sent to his father. Some sources suggest that at the time of his death David was a Lance Corporal however no official records exist with this information. David is remembered on the St John sub Castro Memorial, the Lewes town Memorial and the Royal Sussex Regiment Roll of Honour housed in Chichester Cathedral.