Alfred was born in Newhaven on 26/08/1888 and baptised there two years later on 13/10/1890. He was the eldest son of Harry and Emily Simmons, nee Morris. In 1891 the family were living at 26 Chapel Street, Newhaven and Harry was a wharf labourer. Ten years later they had moved to, what looks like, 3 Bollens Row. This was off Church Hill, Newhaven. Harry was listed as a railway labourer and Alfred was still at school.

On 28/12/1906 Alfred joined the Royal Navy in Portsmouth giving his occupation as a canvas sheet maker. He was numbered SS 104266, the SS indicating he had signed on as a short service stoker. Alfred’s naval career was very short, a little over 8 months. He was invalided out on 05/09/1907 with problems with his ears and he returned to Newhaven. We next find him giving evidence in a court case in 1908. He gave his address as Church Hill and said he was unemployed.

Alfred was on board from 23/09/1911 – 05/01/1912 and his available Merchant Navy records state that he had been employed previously on the same vessel. For this reason he does not appear on the 1911 census as he was at sea.
He moved to the SS Dover Castle at the beginning of 1912, this time as an AB. This was another passenger/cargo vessel owned by Union Castle. It is unclear when he left the Dover Castle but by mid 1914 he was on the SS China having previously served on the SS Sicilia. The China was owned by P&O and operated on the Far East route. Possibly due to the date of sailing, 10/08/1914, a clause was written into the usual ship’s papers, saying that crew could leave at an English port giving 24 hours notice.

Alfred gave his home address as 16 Talbot Terrace and left the vessel on 15/10/1914 at Tilbury. He was not the only one to leave there. While it might be assumed Alfred left the China to join up, this cannot be the case.
He was awarded the Mercantile Marine medal, and to qualify he had to have served for at least 6 months in the Merchant Navy between August 1914 and November 1918, and pass through a danger zone at least once. Although we do not know what vessels he was on he must therefore have served until at least February 1915.

Albert had married Alice Eleanor Francis in Lewes at the beginning of 1914 and they moved to Talbot Terrace. Alfred’s war service has been very difficult to work out and contains a number of oddities.
He was included on the intercessions list at St John sub Castro, apparently as a serviceman, in September 1914 when still employed on the China.
His army papers are not available to view but from other sources it is known that he enlisted in the Royal Sussex Regiment in Lewes. He was numbered SD/2271. This number is from a series issued to members of the 12th Battalion in early February 1915 and this date would agree both with his later obituary, which states that he had been in the service for about two years when he died, and his eligibility for the Mercantile Marine Medal.
The ‘SD’ prefix to his number denotes that he was an original member of a South Downs Battalion. 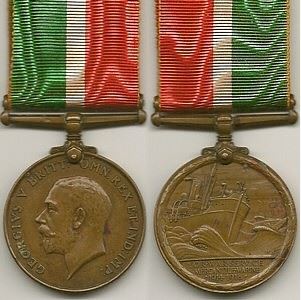 The obverse and reverse sides of the Mercantile Marine Medal and Ribbon
Alfred’s name would have been inscribed on the edge of the medal.

Alfred’s obituary also says that he had served in Egypt before being transferred to France where he was injured, and that prior to his army service he was a quartermaster for the P&O line.

A possible explanation for this is that many of the P&O vessels were requisitioned for war service carrying troops and acting as hospital ships, and this may be how Alfred was in Egypt, and how he qualified for the Merchant Marine medal.
Since he was not entitled to the 1915 Star he did not enter a theatre of war as a member of the forces until after the end of 1915. Merchant Navy service was not a qualification for either the 1914 or 1915 Star.

What is certain is that Alfred was killed in action on 02/08/1917 as a member of the 11th Battalion, on the last day of the Battle of Pilkem Ridge, which was part of the 3rd Battle of Ypres. The war diary of the 11th Battalion notes that there were ‘about 100’ casualties that day. His platoon leader wrote to Alice saying he had been killed instantly by a sniper’s bullet.

The Commonwealth War Graves Commission records that Alfred was initially buried close to where he fell. In 1921, following the decision of the CWGC to concentrate soldiers’ remains in larger cemeteries where they could be properly commemorated and their graves maintained in a fitting way, Alfred was exhumed and identified by his two identity discs.
He was re-interred in the Bedford House Cemetery in Enclosure 4, plot IV C 16. It is a sobering observation that of the sixteen men buried in the same row as Alfred, only two are identified by name.

As stated above Alfred qualified for the Mercantile Marine medal. Men who remained in the Merchant Navy would have additionally qualified for the War Medal. Alfred’s entitlement for this came from his army service. He was also entitled to the Victory medal.

He is remembered on the St John sub Castro Memorial as well as on the Lewes War Memorial and in the Roll of Honour of the RSR held in Chichester Cathedral.