Walter, the son of Henry Frank and Harriett Selina Gray, nee Gebbie was born at the start of 1897 and baptised at St John sub Castro on 10/02/1897. He was one of eight children born to the couple. His father Henry was a jockey and had been working in racing stables in the LaCroix area of France for a number of years.
He and Selina had married there in 1890 and returned to the UK with their eldest daughter, some time between 1892 and 1895. They lived at 9 Toronto Terrace. It would seem likely that Henry had come to work at one of the Lewes stables for a period. 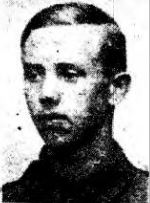 Walter, as printed in the Sussex Agricultural Express

The family moved to Plumpton Green shortly after Walter’s birth and lived in a cottage near the old school in Plumpton Lane opposite the race course. Henry was listed there in Kelly’s directory for 1899.
The 1901 census listed him as a retired jockey. By 1911 the family had returned to Lewes and were living at 1 Pelham Terrace; Henry was listed, aged 47, as a jockey ‘not in work at present’. Walter was still at school.

Aged seventeen Walter enlisted as a private in the 6th Battalion Princess Charlotte of Wales (Royal Berkshire) Regiment in London and was numbered 12116. They had been formed in Reading in September 1914 and from his number, we can deduce that Walter was in the first cohort. The battalion moved to Colchester for initial training and in May 1915 to Salisbury Plain for their final training.

They entered France, landing at Boulogne, on 26/07/1915 and concentrated at Flesselles.
Walter was injured in early 1916 and was entitled to wear a ‘wound stripe’ on his uniform. These were a mark of respect issued by the army to show that he had been injured but recovered sufficiently to return to action.

Events were building up in France towards the first Battle of the Somme. For the Royal Berkshires this meant they were involved in the battle of Albert. Walter was killed on the first day of that battle, 01/07/1916. He was probably initially buried in the small Montaubaun Road Cemetery.
After the end of the war the CWGC took the decision to form larger cemeteries that were easier to maintain in the appropriate manner. In 1919 those men buried at Montaubaun Road were exhumed and reburied with honour in the Dantzig Alley British Cemetery. Walter is now in plot VII A 2.

Walter was entitled to the War and Victory medals as well as the 1914 Star. These, along with his effects were sent to his mother Harriett, then living with her daughter in Brighton. His younger brother served with the RFC and his father with the Royal Army Veterinary Corps. Both survived the war.

Walter is remembered on the St John sub Castro Memorial as well as the Lewes War Memorial.