James’ surname has been spelt incorrectly on the St John sub Castro Memorial. It should have a final ‘s’.

James was born on 12/05/1890 and baptised at St John sub Castro on 06/07/1890 as William James Sherlock Eades, although he was always known as James. In the baptismal register the space for his father’s name has the word James, crossed out. His mother was listed as Millie.
John was brought up by his maternal grandparents Benjamin and Ann Matilda Eades, nee Harris, and it is his grandmother who is always referred to as his next of kin. Benjamin and Ann were both from Lewes but lived briefly in Brighton between 1870 and 1872.
They had ten children, of whom seven were still alive in 1911. Millie was their second child. In 1891 the family were living at 42 North Street but had moved to 7 Mount Place by 1901. In 1905 they were at 11 Fisher Street and had moved again to 11 Park Cottages, New Road by 1911. Benjamin had been a carter but is usually referred to as a general labourer.

Little has been found about James early life. On 20/05/1905, aged just fifteen and a few days, he enlisted in the Royal Field Artillery in Newhaven and was numbered 37068. He gave his occupation as errand boy and said he had previously served in the local militia. He was placed in the 7th depot unit but was discharged after 281 days in February 1906. No reason is given on his papers.

On his return to Lewes he worked as a greengrocer. When he enlisted in the RFA he was measured at five feet one inch but had grown another four inches by the time he joined the Royal Navy on 19/01/1907. He enrolled as a Boy 2nd class in Portsmouth and was numbered 238050. He was sent to the boys’ training ship, HMS Ganges. This was an ageing wooden hulk in the harbour, freezing in winter and very hot in the summer.

James completed his training and was listed as an Ordinary Seaman on his 18th birthday, when his 12 year period of service officially began. He served on a number of different vessel rising to AB while serving on HMS St Vincent in 1911. James was not a model sailor. On his papers five separate periods of time in the cells are listed, usually 7 or 14 days; however on 15/12/1912 he was taken to trial by court martial for striking a superior officer while engaged in the execution of his duty. For this offence he was sentenced to six months detention. 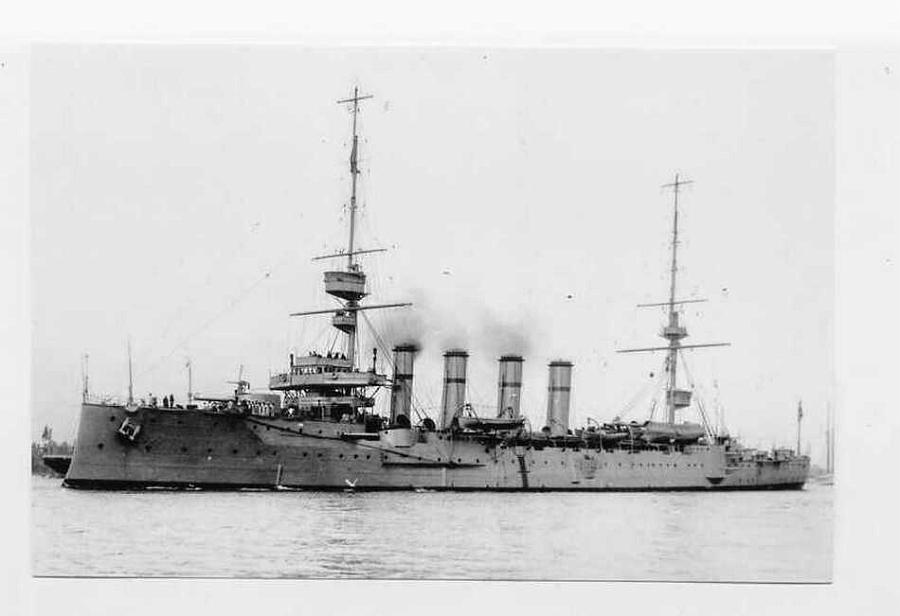 His final ship was HMS Hampshire which he joined on 02/02/1915 after another 7 days in the cells, this time in Devonport. Her role was as part of 7 Cruiser Squadron until, in November, she was detached from the squadron and moved to escort duties for shipping in the White Sea.
She played a minor role in the Battle of Jutland on 31/05/1916. Shortly after the battle she was chosen for a diplomatic mission carrying Lord Kitchener and a delegation to Russia. They left Scapa Flow around 16:45 on 05/06/1916. Due to the bad weather, their route took them through an area that had been mined by the German submarine U-75 just off the north-west shore of the Orkney Islands.

Around 20:45 she struck a mine and sank within fifteen minutes. 737 men were lost with just 12 men being picked up. 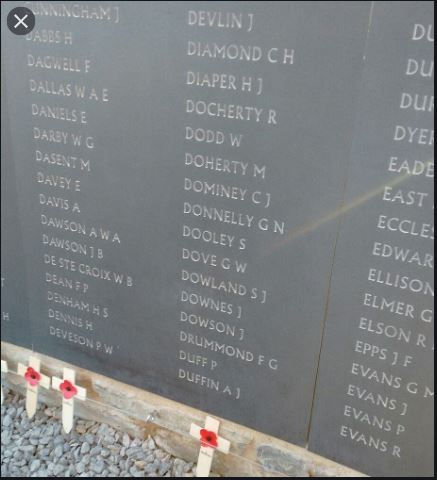 The men of HMS Hampshire are remembered in several places. A tower, the Kitchener Memorial, was erected at Marwick Head in 1926 by the people of Orkney, and a wall was erected nearby in 2016 where all 737 names are inscribed.

The Memorial at the Royal Naval Cemetery at Lyness on the island of Hoy, the right hand side of the base of the War Memorial outside Winchester Cathedral, and a sundial in Niton churchyard on the Isle of Wight, also commemorate them, although no names are listed.

James is listed by name on the Portsmouth Naval Memorial on panel 12, the St John sub Castro Memorial and the Lewes War Memorial.