Thomas was born in Hastings in 1893, the son of Thomas Cuthbert and Sarah Ann Tice, nee Bowerman. Thomas’ father was a farm labourer and the family moved around quite a bit. Thomas’ elder sister was born in Eastbourne, Thomas in Hastings and his younger sister in Southampton.
In 1901 the family were living in Firle at Gibraltar Farm but had moved to 3 South Place, Lewes by 1911. Thomas was then working as a carter’s boy.

Thomas married Beatrice Violet Mitchell in Nutfield on 26/06/1915. She had also been living in Firle in 1901 and had moved to Spring Gardens by 1911. Thomas had already enlisted in the Royal Sussex Regiment by June 1915 and was probably expecting to be sent overseas. A number of soldiers were married in Nutfield around this time.

Thomas enlisted in the 13th Battalion the Royal Sussex Regiment, one of the South Down Battalions, and was numbered SD/3699. Numbering of this battalion was done in alphabetical groups and enlistment locations were allocated specific numbers.
It is known that Thomas enlisted in Brighton and his number shows an enlistment date between November 1914 and February 1915, most likely in January. Original members had the SD prefix to their numbers.
Although men came from across the county to enlist, the battalion was not up to strength until mid 1915 and this may explain why Thomas married when he did. He was placed in D Company. 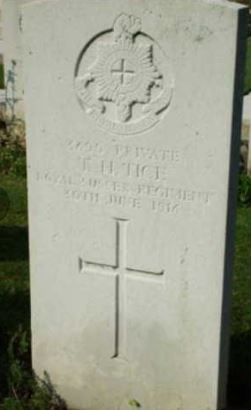 Initial training took place at Cooden near Eastbourne until July 1915 when the battalion was moved to Detling and later to Aldershot. In October it became part of the 116th Brigade of the 39th Division and the whole division was concentrated at Witley until March 1916.

They landed at Le Havre on 5/6th March 1916. From here they moved to serve on the Western Front.
Their first engagement was at Richebourg on 30/06/1916. The Battle at Richebourg, or the Battle of the Boar’s Head has become known as ‘The Day Sussex Died’.

Over 1300 men were killed or injured on that one day, the majority of them from the 13th Battalion the RSR. Most men were never identified.

In a sad way Thomas was one of the lucky ones. His body was found and identified and he is buried in the St Vaast Military Cemetery near Richebourg in plot III S 1. He is also remembered on the St John sub Castro Memorial, but not on the Lewes War Memorial.

Thomas was entitled to the War and Victory medals and these, along with his effects, were sent to Edith.

The final twist to Thomas’ story is that his son, Thomas Stephen William, was born in Lewes just 4 days before his father’s death.