Various spellings of James’ surname have been found. The army medal roll index cards have Pettet, the Lewes War Memorial has Pettit, while the local paper and the St John sub Castro Memorial have Pettitt.

James was born in Barcombe in 1892, the youngest son of Charles and Elizabeth Pettitt, nee Holder. Charles was a railway platelayer. James’ mother died in 1893 and his father remarried at the beginning of 1901. The census lists the family at Bridge Cottage, Barcombe.
By 1911 they had moved to Sole Cottage, still in Barcombe. At that stage James was listed as a cowman. His obituary says that he was a member of the Barcombe Football Club, and there are several references to him in the local paper playing for the club in 1911.

James married Elizabeth Pollard in Lewes in 1913 and they moved to 7, Queen Street, Lewes with James working for the Southdown and East Grinstead Breweries. A son James William was born on 22/04/1914.

James’ army papers are no longer available to view but from other sources we know that he enlisted in the Royal Field Artillery in September 1914 and was numbered 19089. The Royal Field Artillery was responsible for the medium calibre guns and howitzers near the front line and was the most numerous of all the regiments in WW1. James joined the 17th Divisional Ammunition Column which was formed in September 1914. Initial training was undertaken locally then they moved first to Dorset and then to Winchester in May 1915. Originally intended for Home Defence duties their role was changed and they entered France on 13/07/1915 being centred in St Omer. Trench familiarisation was undertaken south of Ypres but James was injured on 10/10/1915 and taken by the 51st Field Ambulance to the Casualty Clearing Station where he was invalided home to hospital in the UK. 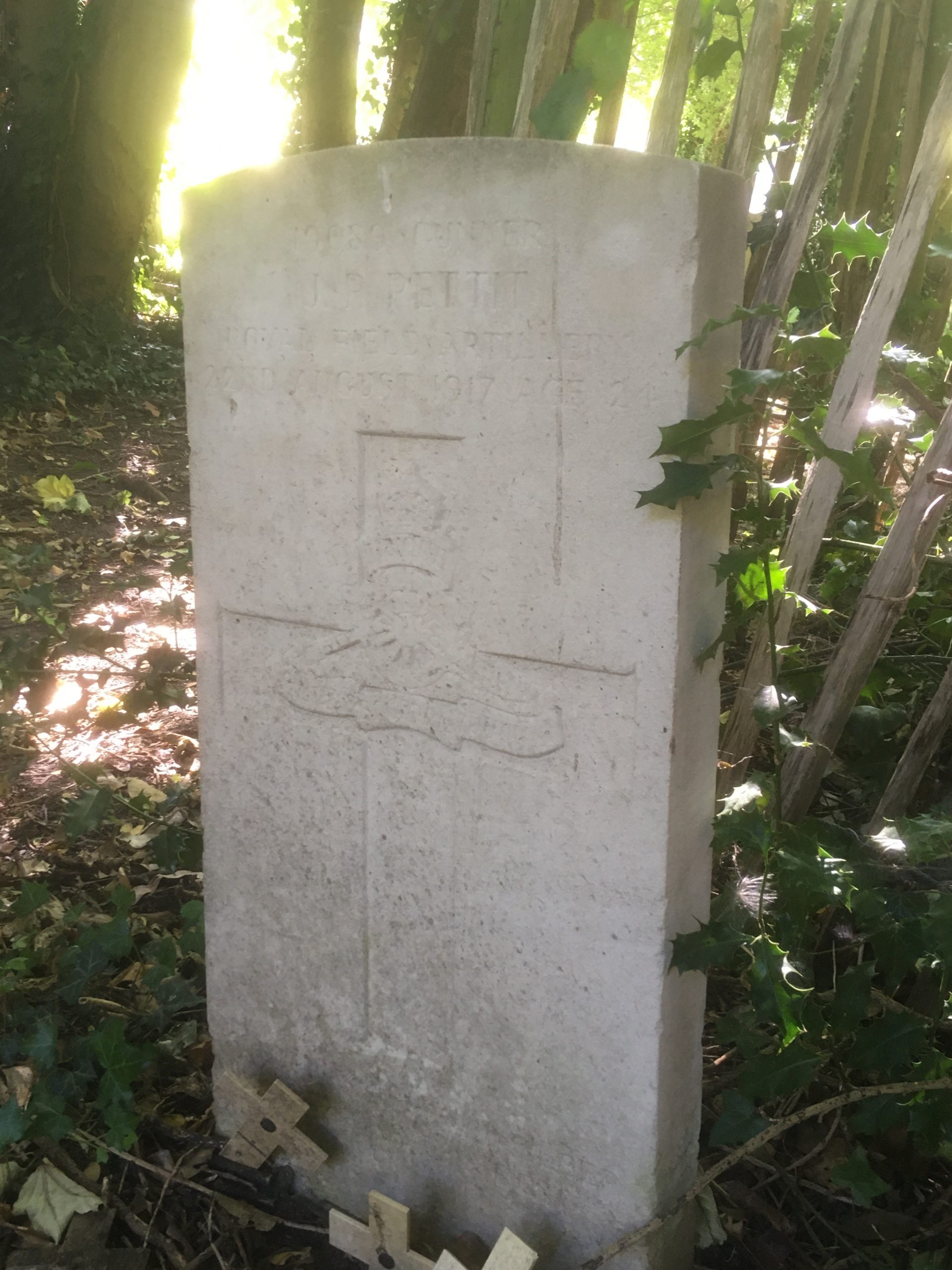 He seems to have recovered sufficiently to return to Lewes as his second son was born on 04/05/1917, meaning he was in Lewes in August 1916. His medal index card suggests he may have been transferred to the 6th Reserve Brigade, probably indicating he was not considered fit for service overseas. His obituary in the local paper says that he had recovered from his initial injuries but fresh trouble occurred. He was treated for this at the Barnet War Hospital and died from pneumonia on 22/08/1917.

James was buried with full military honours on 25/08/1917 in the South part of St John sub Castro churchyard with his grave marked by a Commonwealth Graves Commission headstone. The Highland Light Infantry formed the firing party.

He was entitled to the War and Victory Medals and the 1914 Star which were sent to Elizabeth. She had remarried William Thomas Stevens in 1919 and moved to Railway Cottages, Pevensey Bay.

James is remembered on the St John sub Castro Memorial and the Lewes War Memorial.