William was born on 12/10/1876 the second son of George and Maria Blackmore, nee Avis. George was a blacksmith and the family lived at 2 Elm Grove. William was not baptised at St Michael’s until he was seven years of age. He was part of a ‘block booking’ with his three sisters, who were all baptised on the same day, 27/08/1884. George died in 1885 but the family remained in Elm Grove. Maria took work as a ‘mangle woman’, and William became an errand boy for house agent, Alfred Wycherley. He later worked for the rector of Southover.

William moved to Brighton in the early 1890s, working initially as a coachman, and married Annie Lucy Streeter in Brighton in 1900 but they do not appear to have had any children. In 1901 they were living in Park Street, Brighton. He started working for the London, Brighton and South Coast Railway as a car man in mid 1902, and was based at the goods yard in Brighton. He resigned in January 1904 when he took a job as the chauffeur to Mr Stanley Austen of Brookfield House, Blagdon Hill, Pitminster in Somerset. William and Annie moved to a tied cottage and remained living there until he enlisted in 1914.

William’s army service papers are no longer available to view , however from other sources we know quite a bit about his war service. William enlisted in the 1/1st Battalion the West Somerset Yeomanry in August 1914 in Taunton, and was numbered 923. This number can be traced to an enlistment in the second week of August. He was placed in C squadron which was based in Bridgewater. Training followed in Colchester and Thorpe-le-Soken in Essex. 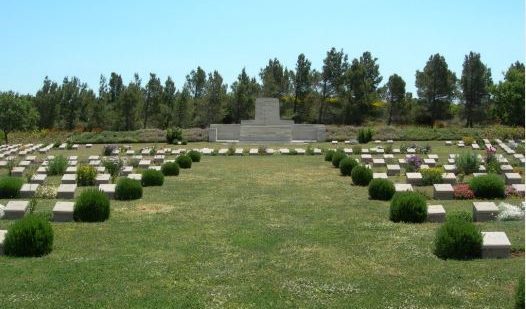 Hill 10 Cemetery, Photo from the CWGC.

On 24/09/1915 the battalion boarded RMS Olympic in Liverpool. They sailed the following day and landed in Suvla Bay, Gallipoli on 09/10/1915, being attached to the 11th Northern Division. The battalion was in trenches and under fire almost immediately and William was killed on 17/10/1915.

The regimental chaplain, A R Fuller, wrote to Annie following William’s death. He said that William ‘died a true soldier’s death’. The battalion’s position had come under heavy shell fire and William became slightly separated from the main group. He was hit by a shell and died instantly.

He was buried, somewhat appropriately, on a hill top, in what became Hill 10 Cemetery. He was buried by his comrades, his grave encircled by stones and a cross erected. Annie also received a touching letter from the wife of his previous employer.

Following his enlistment Annie had returned to Lewes, moving to 52 North Street and later to 6, Lancaster Street. William’s mother was still living in Lewes, in 1911 she was in Abinger Place and in 1939 in North Street.

William was entitled to the War and Victory medals in addition to the 1915 Star. These, along with his effects, were sent to Annie. His name is inscribed on the War Memorial at Pitminster as well as on the St John sub Castro Memorial and the Lewes War Memorial.
When Hill 10 Cemetery was formally taken over by the CWGC they numbered each grave and placed a flat stone on each one. William is in Plot 1, row G grave 20, the grave just visible on the lower left of the picture.