Henry was born on 25/09/1878 in Eastney and his birth was registered in the Portsea Island district. At the time his father George was a sergeant in the Royal Marine Artillery and the family were living in Newton Terrace, Eastney. Several other members of the RMA lived in the same street. Henry’s parents, George and Mary Connett, nee Noton had married in Portsea in late 1873. They eventually had eight children, Henry was their second son, and second child.

The family moved to Lewes in 1890 when George moved to the reserves and became a prison warder. In 1891 the family were living at 5 Talbot Terrace. By 1901 Henry had followed family tradition and joined the RMA, but his family were still in Lewes living in Lancaster Street. They had moved to 14 Toronto Terrace by 1909.

Following his discharge Henry married Charlotte Mary Cooper, nee Conisbee, in Winchmore Hill, her home parish, on 07/11/1909 and they returned to Lewes to live at 43 New Road. He gave his occupation as postman, a job he kept for some years. They had no children. On his marriage certificate his father George was listed as colour sergeant retired, RMA, although the 1911 census gives his occupation as Naval Prison pensioner. 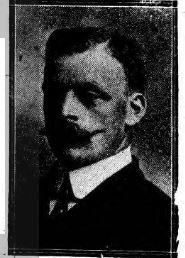 Harry, as printed in the Sussex Agricultural Express.

Henry enlisted in the RMA at Eastney on 16/10/1896 as a private numbered 6322. He was raised to gunner in May 1897. His papers show he served on a number of vessels but for the bulk of his time he was based at the Eastney Barracks. Throughout his time in the service his conduct and character were always listed as Very Good and he received three Good Conduct Medals.

He completed his 12 year term on 23/10/1908 and was discharged, but placed on the reserve list. This was standard procedure for an outstanding marine. His number then became RMA 6322 (RMRB/885 Po) the Po indicating he was listed as from Portsmouth. The usual period in the reserves would be eight years, but he could have been called up at any time. In the event with the outbreak of war he was mobilised immediately. His papers give the date 02/08/1914 and that he was embodied the following day being sent to join HMS Aboukir.

HMS Aboukir was an ageing armoured cruiser. Built in 1901 she had served in the Mediterranean most of her working life and been placed into reserve in 1912. She was re-commissioned at the beginning of August 1914 and the first few days of Henry’s life on board would have been spent getting her ready for operational duty.

With her sister ships Cressy and Hogue she was assigned to the 7th Cruiser Squadron tasked with patrolling an area between the Norfolk coast and the Netherlands in support of a force of destroyers and submarines protecting the Eastern end of the British Channel.

On the morning of 22/09/1914, following a period of poor weather when they had needed to seek shelter, the three ships were patrolling without their destroyer escort which was on its way from Harwich. Steaming in line abreast and with lookouts posted they were spotted by Kapitänleutnant Otto Weddigen in command of SM U-9. At 06:20 he fired one torpedo at Aboukir hitting her port side. Thinking she had hit a mine the sister vessels closed up to take on the wounded. Aboukir listed and capsized at around 06:55.

At the same time Hogue was hit by two torpedoes and sank in around ten minutes. Cressy attempted to ram the submarine which had surfaced but was also hit, at 07:20, sinking within thirty minutes. In all around 1500 men and officers were lost from the three vessels making it the biggest naval disaster up to that date and rivalling the losses on the Titanic.

Henry’s body was not recovered for burial. Memorial cards were issued in support of the lost men. These showed a picture of the Aboukir, surmounted by a picture of the individual man. On the reverse was his name and age, the date of the sinking and a short prayer. This loss just seven weeks into the war made headline news in all the major papers.

Henry is listed on the De Ruvigny Roll of Honour, The Royal Naval and Marine War Roll, the Navy Lists for 1914 and 1915, and remembered on the Portsmouth Naval Memorial reference 5. His name is also inscribed on the Lewes Postal Memorial, in addition to the St John sub Castro Memorial and the Lewes War Memorial.
His three medals were sent to Charlotte, who also received his pension. She had returned to Winchmore Hill.