Henry was born in Lewes in late 1891 and baptised at St John sub Castro on 03/01/1892. He was the eldest of six children born to Henry Benjamin (Harry) and Eliza Florence (Fanny) Washer, nee Herriott. At the time they were living in Spring Gardens.
They were still living there in 1901 with Harry snr working as a labourer in the iron foundry. By 1911 the family had moved to Phoenix Cottages. Like his father Harry jnr was also working at the foundry, as an iron trimmer, and was a member of the Workers Union. Little more is known about Harry’s early life.

Although Harry’s army service papers are not available, a set of TA papers does exist dated 1915. These appear to show that Harry enlisted in the Sussex RGA on 09/11/1915, giving his address as 5 Phoenix Cottages, North Street, and his father as next of kin. They state that he had previously been a member of the 5th Battalion, the Royal Sussex Regiment, but was ‘time expired’.

He was medically examined and passed fit as a gunner, number 910. However, he was discharged 11 days later on the grounds of ‘irregular listing’. His discharge was officially approved on 09/12/1915.
A different Harry Washer, married to Grace and living in North Street, also apparently enlisted the same day and was numbered 911. He too was discharged after 11 days. The same recruiting officer signed both sets of papers. 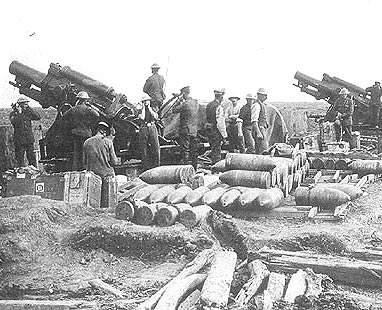 A typical siege battery of WW1. Note the ear protection – fingers in ears!

While there are several things wrong with these papers, not least that the 5th Battalion was already fighting in France in 1915, they do imply that Harry had been a member of the TA Battalion based in Lewes.
From other sources we know that Harry enlisted in the Royal Garrison Artillery and was numbered 179169. He was attached to the 58th Siege Battery.

They entered France in April 1916 having been formed in December 1915. It would seem likely that although Harry was discharged, according to the TA papers, he was re-enlisted almost immediately, probably around 9th December.

Siege Batteries of the RGA were equipped with heavy howitzers. They were based back from the front lines and were capable of firing deep into enemy territory attacking their artillery, but could also place destructive fire on strategic targets. Although relatively mobile they were also vulnerable. The 58th Siege Battery had 8” howitzers and in November 1917 formed part of the 50th Heavy Artillery Group at the battle of Cambrai.

A war diary for the 58th Battery exists but is incomplete for this period so we cannot be sure how Harry died. He was reported killed in action on 31/05/1918 and is buried in the Warloy-Baillon Communal Cemetery Extension in plot IV G 8.

He was entitled to the War and Victory medals. Harry is remembered on the St John sub Castro Memorial, the Lewes War Memorial and the Workers Union roll of honour.