Charles was born in Lewes and baptised at St John sub Castro on 06/11/1892, the 4th child of Walter and Martha Pinyoun, nee Trash. At the time his parents were living at 7 Spring Gardens and Walter was a general labourer. By 1901 they had moved to Hamsey and were living at Friendly Hall Cottages. Charles’ father died the following year. His mother moved back to Lewes and in 1911 was living at 8 York Street, but later moved to 3 New Road, becoming a Strict Baptist and attending the Providence Chapel. 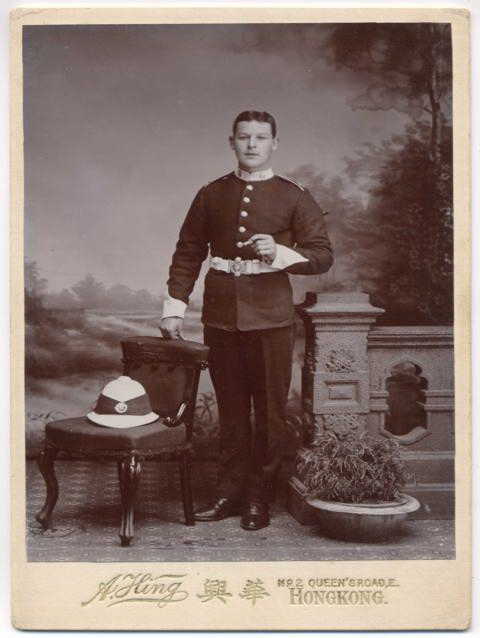 Charles however had enlisted in the 1st Battalion the Duke of Cornwall’s Light Infantry and was numbered 9560. This is just 8 numbers away from Harry Percy (see his page) so it is very likely they enlisted at the same time.
Checking service numbers found on surviving enlistment papers and issued between Charles’ and Harry’s numbers, gives an enlistment date of 23/09/1910.

In 1911 they were both listed at the Gravesend Barracks. Like Harry, Charles’ army papers are no longer available to view and it is not known when he transferred to the 2nd Battalion; however he served in Hong Kong from June 1913 to September 1914. The photograph was taken in Hong Kong and shows Charles in dress uniform.

Charles’ return to the UK and subsequent entry into France is very similar to that of Harry Percy. They left Hong Kong on 21/09/1914, arrived in the UK and left again for France on 19/12/1914. Here their stories differ.

Following disembarkation at Le Havre Charles was almost immediately attached to the Staff Interpreter. He was a Count but I have been unable to identify him. He was probably not an officer of the regiment but employed by the Brigade. Charles acted as his companion and servant and they clearly got on well. It is unlikely that Charles saw action in the trenches.

On 22/04/1915 whilst in a house in Ypres assigned to the Count, a shell exploded outside the door and a fragment pierced the door hitting Charles in the stomach. Despite the best efforts of the Count and other men nearby Charles died from this wound.
The Count wrote to Martha giving her the details of Charles’ death and saying that they had buried him in ‘as nice a spot as we could find’. They planted a cross of flowers on his grave. What seems certain is that the grave was not identified in a more permanent physical way.

The CWGC have him listed as having no known grave, and although the Battalion war diaries mention a heavy bombardment with shells flying into Ypres around 5 pm that day, there is no mention of any casualties from a shell burst.

Charles’ name is recorded on the Menin Gate Memorial at Ypres on panel 20, on the St John sub Castro Memorial, the St Anne’s Memorial and the Lewes War Memorial. His three medals and effects were sent to Martha.