George was born in Lewes on 19/10/1879 and baptised at St Michael’s on 07/12/1879. His parents were Harry and Ella Florence Relph. George was their second child. The surname Relph also appears on records as Relf and Ralph. Harry was a bricklayer and in 1881 they were living in St Martin’s Lane. By 1891 they had moved to 19 Vallance Road and there were three more children.

The next ten years were very eventful for George. He left school and took on an apprenticeship with Mr Cheele, a tailor living in Market Street. Four more brothers were born, but his mother died in April 1898 two weeks after the birth of his sister Ellen.
His father remarried widow Ann Fuller, nee Holmes at the beginning of 1901, just two years after the death of George’s mother. For whatever reason George was listed living with his uncle James in Hove in 1901. His father and step mother with four children from Harry’s first marriage, a new baby and three stepsons from Ann’s first marriage were living at St Margaret’s Terrace near St Anne’s school. 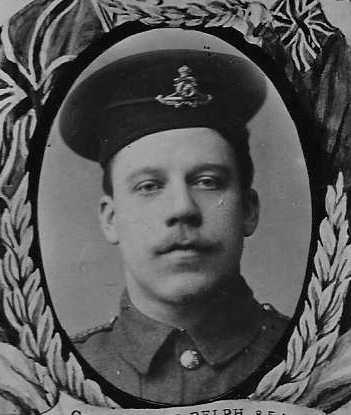 Family photograph of George.
As printed in the Sussex Agricultural Express 23/12/1914.

George enlisted in the Royal Field Artillery in 1902. He was the tailor for the 70th Battery which, along with the 22nd and 50th Batteries formed the 34th Brigade. His army papers are no longer available to view but from other sources we can find out quite a bit about his army career.

As a career soldier he worked his way through the ranks and by 1911 was a Corporal. The 1911 census lists him at Bulford Camp in Wiltshire. This was, and still is, a huge army barracks. On census day it housed several brigades of the RFA, at least three units of the Army Service Corps, the School of Signalling, the Army Veterinary Corps, a unit of the Royal Army Medical Corps and at least one squadron of the Royal Engineers. In addition to the men there were both married and officers’ quarters as well as civilian staff.
Meanwhile his father and new family were living at 25 Lancaster Street.

It is unclear how long George was stationed in Bulford as his obituary refers to his parents being unaware that he was at the Front, believing he was in Ireland. From the beginning of the century there had been moves to introduce Home Rule to Ireland. This is not the place to discuss the ramifications of this, but large numbers of soldiers were stationed in Ireland during this period. In particular the Third Home Rule Bill for Ireland was introduced in 1912 which led to the Home Rule Crisis.
I have been unable to find out when George may have been there but since his obituary refers to a letter received by his family it is possible that it was for a period between late 1911 and early 1914.

The outbreak of war saw huge movements of soldiers. The 70th Battery was mobilised on 05/08/1914 and arrived in Boulogne on 18th. The heavy guns and horses required to pull them took two days to fully disembark.
They then travelled by train to Wassigny. This was followed by a two day march to Givry where they were immediately sent into action near Vellerielle-Le-Sec as part of the Battle of Mons. They came under heavy bombardment from the German howitzers and suffered several casualties. They withdrew, with the rest of the brigade, towards Paris.

They saw further action in the Battle of Marne at the beginning of September, acting as the rearguard. Almost immediately they were involved in the Battle for the Aisne. On 14/09/1914 they crossed the river uncontested and took up a position north of Verneuil as cover for the advance of the 6th Brigade. They encountered severe opposition from the German forces on the Courtecon Ridge and came under heavy artillery fire.
The Battery war diary does not list the numbers of casualties for this day, but George was one of them.

His death is recorded on stone 2A at the La Ferte-sous-Jouarre Memorial. This memorial contains the names of nearly 4000 men who fell in the last three battles listed above and have no known grave.

George is also remembered in the de Ruvigny’s Roll of Honour, the St John sub Castro Memorial, the St Anne’s Memorial and the Lewes War Memorial.
The local Lewes paper gives his family address in 1914 as 4 Queen’s Street, but his father later moved to 11 Nevill Road.

George was entitled to the 1914 Star and the War and Victory medals. These along with his effects were sent to his father. Probate was also granted to George’s father. His two brothers who served survived the war but his step brother Sidney William Fuller was killed. (see his page)