Cecil was born in the third quarter of 1894 the second son, and seventh child, of Edward and Esther Briggs, nee Rooke. Cecil does not seem to have been baptised at St John sub Castro even though his parents lived in North Street. His father worked for Parson’s brothers, timber merchants, as a cleaver; he split oak branches to make the lathes used in wattles. Edward’s father and grandfather, both called Benjamin, had also been wattle makers and by 1911 Cecil was assisting his father, making at least four generations of the family in the same field of work. Cecil’s elder brother Edward worked as a music hall porter but was blind in one eye. He emigrated to Canada in 1911. 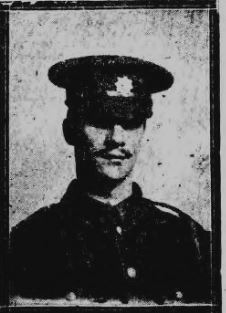 Cecil, as printed in the Sussex Agricultural Express.

Although Cecil’s full army papers are no longer available to public view they can be accessed by a personal enquiry at Wellington Barracks.

The Coldstream Guards Nominal Rolls show that he enlisted in Lewes on 31/12/1912 and was numbered 9917. These rolls also list him as a wood cleaver in civilian life. This was a career choice on Cecil’s part.
The Coldstream Guards are the oldest surviving continuously serving British regiment.

What is slightly unclear is which battalion he was in. The CWGC have him listed as being in the 2nd Battalion but De Ruvigny’s Roll of Honour and the register of his effects suggests the 3rd Battalion. Prior to the outbreak of war the 2nd Battalion was stationed in Windsor and the 3rd at Chelsea Barracks.

Both Battalions landed at Le Havre on 12/08/1914, the date on Cecil’s medal roll index card, so he was in the first cohort of men to arrive in France. Both battalions fought together as part of the 4th (Guards) Brigade of the 2nd Division and encountered fierce fighting shortly after their arrival. From the details in the battalion war diaries below it would seem that Cecil was most likely in the 3rd Battalion. Cecil would have been involved in the Battle of Mons, the Battle of the Marne and the First Battle of the Aisne. This last battle saw the start of the use of trench warfare as both sides settled in for a long engagement.

Cecil was killed at Soupir, near to Vailly on 14/09/1914. The 2nd Battalion had arrived at Soupir around midday but come under immediate heavy fire. Their war diary records just one other ranks death that day. The 3rd Battalion, who were following in support, also encountered heavy fire and were ordered to support other regiments in the area. They were continually moving around a farm, rather than occupying a static position. At the end of the day the diary sentence numbering those killed and injured is not completed, indicating the complexities of their position.

Cecil was initially buried by German troops and a cross erected to mark where he was. This area of France changed hands a number of times during the war until finally falling to the French in mid-September 1918.

Vailly British Cemetery was established after the Armistice when the remains of Commonwealth soldiers were brought in from other burial grounds and battlefields throughout the region. Most of those buried in Vailly were killed during the Battle of the Aisne in September 1914. Cecil was identified by his name on the cross and his tags. He was re-interred with honour in early November 1919. He lies in grave I.D.20.

Cecil was entitled to the War and Victory medals and the 1914 star with the Mons clasp. He had left a will in favour of his mother, however, since she had died in 1916 and his father the previous year, his effects and medals were sent to his eldest sister, as his next of kin. She was then living in Tonbridge.

John is remembered on the St John sub Castro Memorial and the Lewes War Memorial.