George was born at Alfriston in 1890, the eldest son of George Alexander and Isabella Butchers, nee Read. George snr. was a successful steeplechase jockey at the time. He had been born in Rye and in 1891 the family were living in High Street Alfriston. Three of their eleven children were born there but the family moved to Lewes around 1895 when George snr started training horses.

In 1901 they were living at 69 New Road, and by 1911 George and Isabella were living at ‘Cairn Deigh’, 27, King Henry’s Road. George Frederick was apprenticed as a jockey to C D Marnes in 1903. He showed some aptitude and won four races in 1905. Following the completion of his apprenticeship he rode for his father and continued to do well. By the time of his enlistment in 1916 he had ridden over 100 winners, mainly over hurdles.

George married Edith Marie Skinner in Brighton Register Office on 05/03/1910 and they had a daughter Evelyn the following year. On the 1911 census he described himself as a professional jockey living at Kingscote, The Avenue. A second daughter was born in 1912.

George was riding in Belgium when war broke out and he had a difficult time getting back to the UK. He was called up in December 1915 and took the oath at the recruiting office in Lewes into the 3/1st Battalion Sussex Yeomanry as private 3443. His enlistment was not approved until April the following year as George went before a tribunal hearing in Lewes in March 1916 claiming that as a jockey he had to keep to a certain weight and if he joined the army he would put on weight and be unable to ride. This would cause serious hardship as he was self employed and had no reserves. He also claimed that he was the only help for his father in his business. His appeal was turned down. He was immediately embodied, on 12/04/1916.

The 3/1st Battalion was a reserve battalion training men for supply to the 1/1st and 2/1st Battalions. On 06/11 1916 George was transferred from the reserves to the 1st platoon of the Household Battalion, as a trooper numbered 1761. He was sent to France to join his regiment embarking at Southampton and arriving at Le Havre on 8th November.

George would not have been used to the harsh waterlogged conditions and was admitted to the 6th General Hospital at Rouen on 17/12/1916 suffering from trench feet. He remained there until 28th and was then discharged to the base camp at Harfleur until 01/01/1917. He would then appear to have been sent to Le Havre for two days on 15th January. 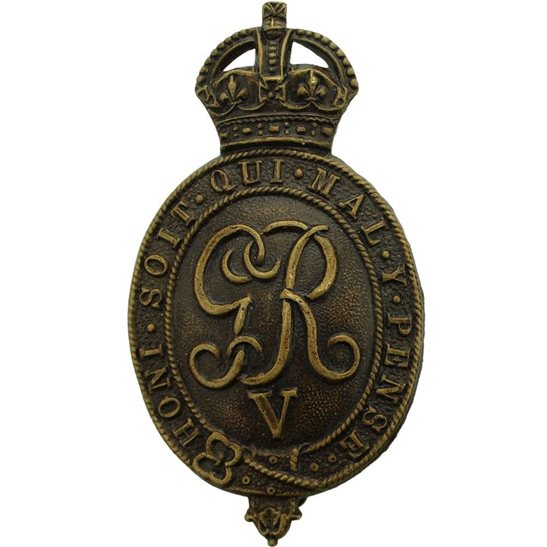 Cap badge of the Household Battalion

The Household Battalion was heavily involved in the fighting around Arras, in particular in the taking of the village of Roeux. On 03/05/1917 George was reported missing after going to get help for some severely injured men. His parents and Edith were informed and he remained on the Missing List until September when he was found, partially buried. His commanding officer wrote to both his parents and Edith describing George in glowing terms.
He is interred in the Roeux British Cemetery in plot A 60, close to the Great Cross. His effects, which included his watch, were returned to his family. Edith was awarded a pension for herself and the two children. The owners George had ridden for clearly held him in high regard as Horatio Bottomley organised a fund for the support of his family. By April 1918 this had reached over £650. a not inconsiderable sum. Edith, having moved to live with George’s parents following his death, moved to Toronto Terrace by 1921.

George was entitled to the War and Victory medals which were sent to Edith. He is remembered on the St John sub Castro Memorial, the Lewes War Memorial and the memorial at St Anne’s.