Albert was born in Lewes in the 2nd quarter of 1898, the youngest son of Jabez Frank and Alice Page, nee Taylor. Albert was younger than his brothers by some years. Jabez had been born in Framfield and Alice in Fletching and they were married at St John’s Burgess Hill on 09/11/1878.
At the time of his marriage Jabez was living in South Malling. He signed the register as Jabez Frank but it was registered as John Jabez. Most records have him simply as Jabez but the CWGC and an online Lewes roll of honour list him as Frank, and this has led to some confusion.
Jabez is variously listed as a sawyer, carpenter and railway labourer. In 1901 the family were living at 6 Little East Street, having moved from Mount Cottages. By 1911 they were at 14 Friar’s Walk. 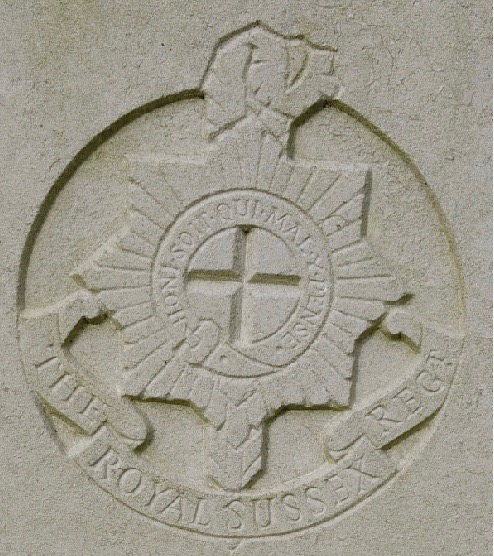 Albert’s obituary in the local paper gives very little information about his life except to say that prior to his war service he had worked for the Southdown and East Grinstead Breweries. His army service papers are no longer available and information on Albert’s war service is scant.

Albert would not have been 18 until early 1916 so it is unlikely he joined the forces prior to mid 1916. The Military Service Act specified that men should be over 18.
From the medal rolls we know that he enlisted in the Royal Sussex Regiment and was numbered G/20119. This number was issued to a man enlisting for war service only.

The Rolls show that he originally enlisted in the 3rd Special Reserve battalion. This battalion was based in Newhaven on garrison duty and remained there throughout the war. They supplied men to other battalions and at some point Albert was transferred first to the 12th Battalion and later the 7th Battalion; however it has been impossible to find dates for these transfers, or to assign a date to his enlistment. Albert would have been transferred as a draft with other men.

By 1917 the 7th Battalion RSR had moved towards Arras and were involved in the 1st and 3rd Battles of Scarpe as well as at Arleux. The Battalion diaries are held at the West Sussex Record Office and detail the actions of the Battalion but do not generally name individual men, so we cannot know when Albert arrived.

They had moved to Monchy on 23rd September and had several quiet days before moving to the front trenches on 29th. The entry for 01/10/1917, the date of Albert’s death, reads “Front Trenches 2 – 4 pm we bombarded the enemy trenches on our immediate right. Enemy sent over many large Minnenwarfer from 6.15 – 6.45 pm and again at midnight. Casualties 2 killed 1 wounded.” One of the two killed was Albert.

Albert, still only aged 19, is buried in the Monchy British Cemetery in plot I N 5. He is remembered on the St John sub Castro Memorial as well as the Lewes War Memorial. He was entitled to the War and Victory medals. These would have been sent to his mother as his father had died in 1920.