Although always listed as Albert or Albert Thomas, Albert was baptised at St John sub Castro on 04/07/1886 as Thomas Albert. At the time his parents, Albert and Sarah Jane Chandler, nee Wheeler, were living at 5 York Street, Lewes (believed to have been on the east side of North Street, between Wellington St and Phoenix Place). They were still there in 1891 and 1901. Albert snr was a bricklayer.
Aged 15, Albert jnr was working as a butcher’s boy in 1901.

He married Kate Simmons in Newhaven in 1910 and the following year they were living at 4 Lancaster Street. Albert was then working as a store keeper in a motor garage. Their son Albert Henry was born in late 1912. Albert snr died in Lewes in 1913.

Albert’s army service papers are no longer available to view, but from other sources we can find out quite a bit about his war service.
Albert initially joined the 5th Battalion of the Royal Sussex Regiment, and was numbered 4199. This number corresponds to an enlistment in May or June 1916. The 5th or Cinque Ports Battalion was a Territorial Battalion with its headquarters at Hastings. Albert was a member of ‘D’ company which, at the beginning of the war, was based in Lewes but had its drills in either Glynde or Stanmer. 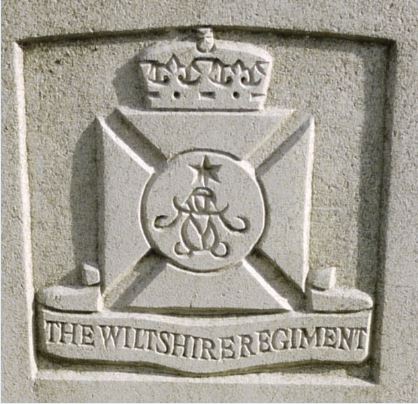 Badge of the Wiltshire Regiment
as depicted on a CWGC headstone

It is not known when he entered France, but when he was injured at the beginning of March 1917 the entry lists show him as having served in the field for six months, suggesting he arrived in September 1916.
Since his entitlement to the War medal is listed under the Wiltshire Regiment it would seem likely that he was posted to them before arriving in France. He was posted to the D Company of the 2nd Battalion (The Duke of Edinburgh’s) Wiltshire Regiment and renumbered 26755. Their battalion war diary notes the arrival of nine other ranks on 01/09/1916, and a further 45 from Rouen on 24/09/16. It is very likely that Albert was in one of these drafts.

This battalion spent the first three months of 1917 near Arras. On 03/03/1917 Albert was listed at No. 32 Casualty Clearing Station, then sited at Warlencourt, not far from Arras.
On 04/04/1917 he was admitted to the 18th General Hospital at Rouen with a ‘Gun Shot Wound to the head (slight)’. He had arrived from Arras where he appears to have been injured on 30/03/1917. The war diary for this period refers to ‘a little hostile shelling’ on 31st March with four other ranks wounded.
Since Albert was injured by a gunshot wound it may have been by sniping from the enemy, but this is not recorded. While the wound may have been listed as slight it was sufficiently serious that after a stay of 3 days Albert was transferred, via a sick convoy and ambulance train, to No 6 Convalescent Depot at Etaples.
From there he would have returned to his unit via the base depot. The war diary records thirteen other ranks rejoining from the depot on 15th April.

Albert’s battalion marched North from Arras shortly after he rejoined and was in preparation for the third Battle of Ypres which took place in July. They ended the year relatively quietly in the Gheluvelt area.
At the beginning of 1918 they marched South to St Quentin where they took over the trenches to the South. They were aware that a German attack was imminent and this was launched on 21/03/1918. The 2nd Battalion was quickly outflanked and surrounded.

Albert was one of 22 officers and 600 other ranks who were killed that day. Clearly this was a traumatic day and Albert’s death was presumed as 21/03/1918, however he has no known grave. There is a slight conflict in his ranking as the medal award rolls and medal index cards list him as a corporal but the CWGC and the army pension records have him listed as a private.

Albert was entitled to both the War and Victory medals. These and his effects were sent to Kate.

Albert is remembered on the Pozieres Memorial on panel 64, as well as on the St John sub Castro Memorial and the Lewes War Memorial.