William was born in Lewes , the eldest son of William R and Ruth Roser, nee Boys. He was baptised at St John sub Castro on 02/08/1885 while the family were living at Paddock Row.
By 1891 they had moved to 18 West Street and William snr was listed as a fishmonger. This is a little surprising as all other census entries show him as a labourer.
Another surprise is that William’s mother Ruth is listed twice. On the entry for West Street she is is listed as being born in Lewes when she had actually been born in Alciston. Her other entry shows her as born in Alciston, with the correct year of birth. She was apparently ‘living in’ at the Lewes Sanatorium and working as a charwoman. The only other member of staff listed there was the Matron. The implication of this is that William snr gave the information to the enumerator and made mistakes.

By 1901 the family were still living at 18 West Street with William snr listed as a labourer in the iron foundry. William jnr was listed as a blacksmith. By now he had three siblings.
Ten years later William snr was still working in the iron foundry and William jnr was also listed as a labourer there. The family had moved to 51 North Street. William snr died in 1911.
It is possible that the family then moved to 3 Queen Street as in September 1913 William jnr was tried at the Lewes Police Court and convicted of assault on Mary Jane Avis. He gave his address as Queen Street and occupation as blacksmith. From the court papers it would seem that Mrs Avis and William ‘had history’. He claimed it was a provoked assault but he was sentenced to 1 month hard labour.
What this shows is that although the census listed William as a labourer, he was almost certainly working in the forge at the foundry.

It has not been possible to find out when William enlisted as his army papers no longer exist, but since he was not entitled to the 1915 Star this would suggest he did not join up until called up, probably when the age limit was extended. Other records give some information.

His initial enrolment was in the Royal Engineers and he was numbered 536132. This number ties up with an enrolment in the 3rd Home Counties Field Company and a batch of numbers issued in early 1917. This was a Territorial Force. The Field Companies provided technical skills in support of the regular army. William reportedly enrolled in Newhaven. 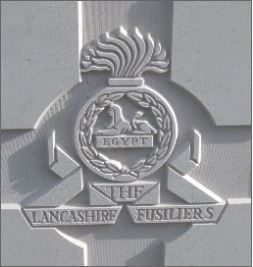 Badge of the Lancashire Fusiliers
as depicted on a CWGC headstone

He was sent overseas and transferred to the 18th Lancashire Fusiliers and renumbered 46301. He was subsequently transferred to the 15th Lancashire Fusiliers. Both the 18th and 15th were Salford Pals battalions. It was not uncommon for men to change battalions or regiments in the field during WW1. As a battalion became depleted it was reinforced from other regiments serving in the same place. As his papers are not available it is difficult to be precise about what William was doing, however, it is known that the 15th Battalion was part of the 96th Brigade of the 32nd Division and served on the Western Front throughout the war.

The battalion war diary for 16/05/1918, the date of William’s death, has the following entry ‘In Trenches. About 9.0 am enemy raided two of our Posts held by B Coy. 6 of our men are missing.’
The battalion had only entered the front trenches near Blairville  the  day  before,  having  been  in  billets at Barly for 2 weeks undergoing further training. It has been assumed by the army that all six men were killed that day as they were initially buried in Blairville Orchard cemetery. They were all later exhumed, identified from their uniforms and crosses erected at the time, and re-interred in the Cabarel-Rouge British Cemetery at Sonchez in adjacent plots. William is in plot VIII O 11.

William was entitled to the War and Victory medals which were sent to his mother, then living at 1 Abinger Place. He is remembered on the St John sub Castro Memorial as well as the Lewes War Memorial.