Ernest was born on 14/07/1888 in Tonbridge in Kent, the son of Arthur William and Eliza Rogerson, nee Marks. He was their third child, and all three children had been born in Tonbridge. The family moved to Willesden in either 1889 or 1890 and Ernest’s sister was born there. Arthur was listed in 1891 as the secretary of the Young Men’s Christian Association. Whether this was a local or national appointment is unclear.

They moved to Farnham around 1894 where their youngest child was born, followed by a move to Claremont, a house on the corner of St Anne’s Crescent. Arthur was a brewer and manager of F Ballard and Co, brewers of Bell Lane, Southover.
By 1911 the family had moved to Denton in the Avenue; however Ernest was away learning the brewing business and living in Maidstone where he was listed as a brewer’s pupil. There were a number of brewers in Maidstone at the time, but it is not possible to identify with any certainty where Ernest was learning his trade.

He must have nearly completed his training as on 11/09/1911 he arrived in Albany, Queensland on the SS Suevic having travelled from Liverpool. He gave his address on the ship’s manifesto as 2 Horace Street Malvern, and his occupation as brewer.
We do not know exactly what Ernest was doing in Australia, but he met and became engaged to Alice Margaret Dobbs, known as Fay. She came from Wagga Wagga, however they never married. Her family believe that the engagement was broken off when Ernest returned to the UK on the SS Persic, a White Star vessel, which arrived in Tilbury on 08/06/1913.
Ernest started working as a brewer in Weymouth and became involved with the scouts there, being listed as the district scoutmaster of the Weymouth Association. 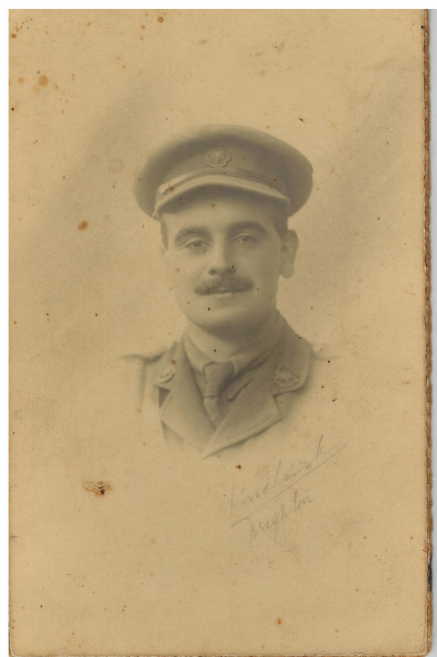 Ernest enlisted in the 9th Battalion the Royal Sussex Regiment. This was formed in Chichester in September 1914. Ernest must have accepted a commission as he was gazetted as a Second Lieutenant on 02/10/1914.
His official officer’s papers are held at The National Archives at Kew with reference WO 339/2214. They have not yet been digitised but are available to personal callers at TNA. As an officer he was not given an army service number.

The 9th Battalion landed at Le Havre on 31/05/915 having travelled from Southampton on the SS Marguerite.
Within weeks they were involved with the Battle of Loos where they suffered heavy casualties. They were part of the 73rd Brigade of the 24th Division. The war diaries of the battalion are held at the West Sussex Record Office in Chichester and these give full details of the various actions the battalion was involved in.

By August 1916 Ernest had been made up to Captain of
C Company. Battle plans for 19/08/1916 show that by 07:30
C Company were to move to support trenches at Guillemont and reinforce the actions of the 7th Northants Battalion. Ernest was reportedly killed by rifle fire early in the day, but with the later very heavy fighting and shelling his body was not found or recovered.

Ernest is remembered with his colleagues on the Thiepval Memorial on pier and face 7C. He is additionally remembered on the St John sub Castro Memorial, the St Anne’s Memorial, the Lewes War Memorial and the Scouting roll of honour for WW1.

Ernest was entitled to the 1915 Star and the War and Victory medals; these were sent to his father. His father Arthur was very active within Lewes. Among other things he was appointed sidesman at St John sub Castro at the annual meeting in 1917, and Rector’s Warden in 1919.