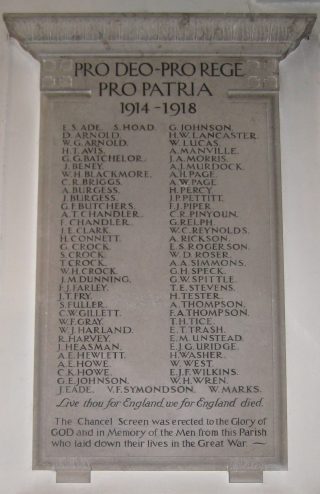 The idea for a memorial at St John sub Castro was first suggested in 1920. A special meeting of the The PCC was held on 22/04/1920 to look into the idea of ‘… a memorial in the church to those who had fallen in the War …’.
The Rector, the Rev. Prebendary Poole, was in the chair and it was unanimously agreed that a parish memorial should be erected. The form of a memorial was discussed at length and on the proposition of Mr A W Rogerson, seconded by Mr H J Hillman, the two church wardens, an oak chancel screen was felt to be appropriate and that it would ‘enhance the beauty of the church’. The Rector suggested setting up a small committee with the power to raise the funds. After discussion it was felt that the PCC ought to form the committee but with the addition of some parishioners. A figure of £150 was to be aimed at.

St John sub Castro was not the only parish in Lewes raising funds for a Memorial during 1920. In early 1920 the mayor had proposed a large memorial for Lewes town and was trying to raise the nearly £1500 he felt it would require. At the time St John sub Castro was the largest parish in Lewes and fundraising began in earnest, although there are few newspaper reports of how it was progressing. By the beginning October over £120 had been collected or promised.

How names were selected for inclusion on the St John sub Castro Memorial is not known. Most of the men named also appear on the town Memorial. Two are additionally recorded on the Post Office Memorial and a further seven on the Memorial at St Anne’s.

In the event a wrought iron, rather than oak, chancel screen was chosen and this and the tablet were unveiled by the rector at a crowded special evensong on Wednesday 02/11/1921. The tablet bears the inscription
‘Pro Deo Pro Rege Pro Patria’, for God for King for Country, and the dates 1914 – 1918.
The original tablet had 65 names inscribed on it, those for J Eade(s), W Marks and S Hoad were added later. Why V F Symondson was carved out of order is also not known.

The wrought iron screen was removed from its original position during the recent renovations and part of it erected round the WW2 tablet.