Sidney was born in Lewes in the 4th quarter of 1893 to John and Anne Fuller, nee Holmes. His father had died around three months before Sidney’s birth. Sidney’s parents had married in 1888 and had three children. His mother remarried, Harry Ralph (Relph), at the beginning of 1900 and had a further four children. It would seem that Sidney was the only one of his natural siblings to live with his stepfather and mother.

In 1901 they were living at 2 St Mary’s Terrace in St Anne’s parish. Harry Relph was a bricklayer. In 1906 Harry was taken to court by the school attendance officer, Mr Waghorn, and fined for failing to send Sidney to school regularly.
Sidney was probably a ‘lively’ child as just three years later on 4th October 1909 he was taken to Lewes Police Court for letting off fireworks on the highway at the top of School Hill. When challenged by the local policeman he apparently said that as it was near the 5th of November he wanted to try one. He was fined 6d (2½p). At the time his address was given as Neville Terrace.
Sidney may have calmed down a little as he grew older as the 1911 census lists him, still living at home at 25 Lancaster Street, but now working as a sail cloth maker. The family had moved again by 1913 as a postcard sent to Sidney’s sister was addressed to 16, Little East Street. 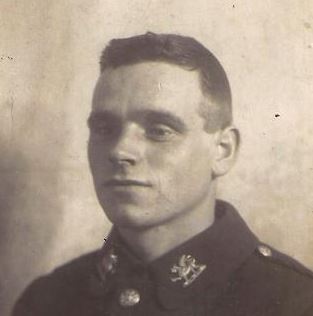 Believed to be Sidney Fuller.

We cannot be sure when Sidney enlisted in the 8th Battalion, East Kent Regiment as his army papers are no longer available. However, it is known that he signed on in Brighton and was numbered G/5923.
The 8th Battalion had been formed originally in Canterbury in September 1914 and started assembling near Shoreham. They suffered from a lack of equipment and NCO’s but in June 1915 moved to Aldershot to complete their training. From his number it would seem likely that Sidney joined in early 1915, with the ‘G’ indicating that he signed just for war service.

The 8th Battalion landed at Boulogne on 01/09/1915 and spent the next few days between Etaples and St Pol before marching to Loos. The Battle of Loos was fought between 25/09/1915 and 08/10/1915. Harry was eventually listed as presumed killed on the second day of the Battle of Loos but he has no known grave. His death is commemorated on the Memorial at Loos on panel 17A.

Sidney was entitled to the War and Victory medals and the 1915 Star. These, along with his effects, were sent to his mother who had moved to Nevill Road. He is listed on both the St Anne’s and St John sub Castro Memorials as well as the Lewes War Memorial. His step brother George Reuben Relph is also listed in all three places and another step brother, John William, at St Anne’s and on the Lewes War Memorial.