George Henry however remained in Lewes working with his uncle William Cole, a house painter, who lived at 4 St Martin’s Lane. George married Rosina Alice Winder in Lewes at the end of 1914, and a son George Thomas was born on 02/03/1915. 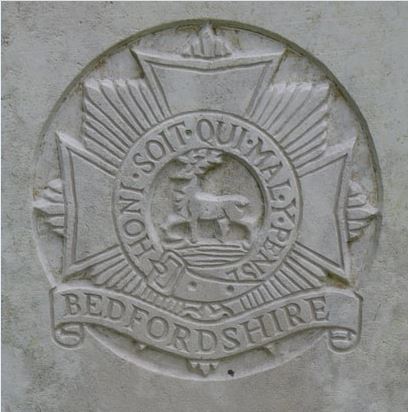 Badge of the Bedfordshire Regiment
as depicted on a CWGC headstone

George’s wartime army service is difficult to trace. His papers are no longer available to view but the medal rolls and his medal index card state that he was in the Suffolk Regiment, numbered 266150, and later the 1st Battalion the Bedfordshire Regiment, re-numbered 41128.
The Suffolk Regiment raised 23 battalions during the course of the war including reserve and TF battalions, so it is nearly impossible to find out which battalion George was assigned to. Six figure service numbers seem to have been issued relatively late, suggesting George did not serve until at least 1917. Since he was not entitled to the 1915 Star this also suggests a later enlistment. It is also uncertain when George transferred to the Bedfordshire Regiment. The 1st Battalion formed part of the 6th Division and served in France and Belgium.

What is certain is that George was killed on 20/07/1918. The Battalion war diary for that day says that A Company undertook a raid and attack at midnight. This was successful in driving the enemy back over the Platebecque.

During the attack, which encountered heavy shelling, amongst other casualties 2 ordinary ranks were missing believed killed. One of these was George. He has no known grave.

George is remembered with colleagues from the Bedfordshire Regiment on the Ploegsteert Memorial on panel 4E. George is additionally remembered on the St John sub Castro Memorial as well as the Lewes War Memorial.

He was entitled to the War and Victory medals which were sent to Rosina who married George Nye in late 1920. Both she and George Henry’s son George Thomas remained in Lewes and were living at 39 Sun Street in 1939.