Albert was born on 03/11/1887, the second son of Thomas and Mary Ann Burgess, nee Taylor. The family are missing from the 1891 census, but in 1901 Mary Ann and her sons Frederick and Albert were living at 31 Lancaster Street with Mary Ann described as a dressmaker, Frederick as a clicker and Albert as a domestic houseboy. A clicker cuts the uppers of shoes from the raw leather. Mary Ann’s father was a shoemaker so it is likely that Frederick was working for his grandfather.
Thomas was not listed in 1901. He was also not listed in 1911 when Mary Ann and Frederick were still living in Lancaster Street but Albert was lodging in Camberwell having started working that year for the LCC as a messenger. His future wife, Alice May Statham, was working as a kitchen maid for the Anglican Bishop of Southwark, Edward Stuart Talbot.

Albert and Alice married in her home parish of Etwell Derbyshire on 12/05/1913. Albert’s father Thomas was listed in the marriage register at Etwell as ‘?deceased’ suggesting that he had not been heard of for some time. Albert was described as a gas meter tester, with an address in Walworth.
Following their marriage Albert and Alice returned to London and a son Albert Reginald was born in Southwark on 08/12/1914. Their address in London was 82, Lorrimore Road, Walworth. The LCC Record of Service states that Albert was part of their Public Control Department.

Albert’s army service papers are no longer available to view but from other sources we can find out quite a bit about his war service. Albert enlisted in the 1/21st Battalion, the County of London Regiment (1st Surrey Rifles). This was a territorial unit forming part of the 6th London Brigade, 2nd Division. They were based at Camberwell New Road, which is where Albert enlisted. His number, 1577, indicates an enlistment date in early 1914.

On 02/08/1914, just as they arrived on Salisbury Plain for their annual training, the order for mobilisation was received and they returned to Camberwell where, within four days, sufficient new recruits had enlisted to bring the battalion up to full strength. They marched to St Albans for intensive training.

The 1/21st ‘s landed at Le Havre on 16/03/1915 and entered the trenches at Bethune at the beginning of April for training in trench warfare. By mid May they were in charge of a section near Festubert which they held during the ensuing battle, gaining a battle honour. There followed a period of rest and reorganisation and it may be that this was when Albert was promoted to Lance Corporal, but this cannot be confirmed. The battalion returned to the front line in June for a relatively quiet three months before they were again in action at the Battle of Loos. They were stationed among the coal workings in the area and spent the winter there, moving between the dangerous defences in the areas of Lone Tree and Hohenzollern Redoubt. 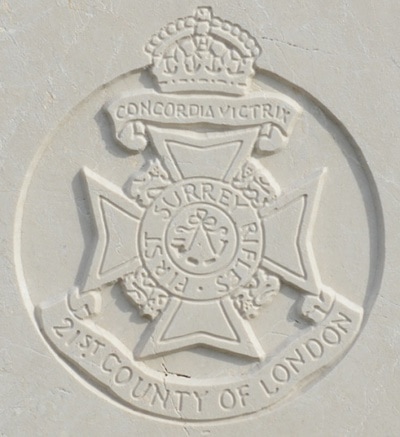 Badge of the 21st Battalion, the County of London Regiment, as it appears on a CWGC headstone.

In the spring of 1916 they were moved to the area of Vimy Ridge. Although initially fairly quiet, intensive mining and tunnelling operations began on both sides in April, and a surprise, heavy and sustained German bombardment of the front line took place on 20/05/1916. This saw the German forces gain some ground. The 1/21st ‘s had been in billets at Estree-Cauchy when the attack was launched but they immediately entered the fray.
A counter attack was launched around 8.25 am on 23rd. Although briefly successful, and inflicting heavy casualties, the 1/21st was not supported and were forced to retreat. They lost 187 men of all ranks that day. Albert was initially reported as missing but his date of death was confirmed as 23/05/1916 although his body was never found.

In letters sent to his mother, colleagues described him as ‘one of the best’. Albert was entitled to the 1915 Star and the War and Victory medals. These, along with his effects, were sent to Alice who had returned home to Egginton Road, Etwell by 1920. She and their son Albert remained in the area moving to Belper by 1939.

Albert is remembered on the Arras Memorial in bay 10, the St John sub Castro Memorial, the Lewes War Memorial and the LCC Record of Service. His details and death are also recorded on the online London WW1 Memorial.