Stephen was born in Lewes in the third quarter of 1899, the son of Charles Peter and Lucy Hannah Hoad, nee Washer. Charles was a foundry labourer and in 1901 the family were living at 3 Brook Street.
By 1911 they had moved to 6 Phoenix Cottages in North Place. Stephen was one of eight children born to the couple. Little is known about Stephen’s early life in Lewes. On his enlistment in 1917 he said that he was an errand boy and that his parents were living at 41 North Street. 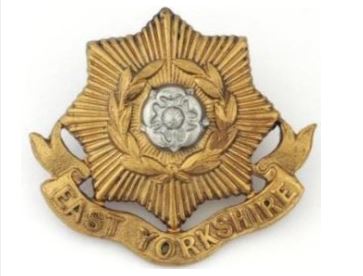 Stephen’s army papers still exist but are among the ‘burnt’ papers damaged by an incendiary bomb attack on the repository during WW2. Not only are his papers burnt but they are badly water damaged and almost unreadable.

From a variety of sources we can deduce that he enlisted in Chichester on 16/02/1917, aged 18 years and 7 months. He was  numbered  29192  and  was  placed  initially in the 26th TR Battalion of the East Yorkshire Regiment. This had originally been formed as the Hull Pals Regiment, but numbers had been severely depleted by the fighting in France and new recruits were drawn from other sources. Stephen may have been part of 252 Battery.

He was transferred to the 10th Battalion on 19/08/1917 following his training and sent to France. His date of arrival in France is not known but the Battalion was involved in the Battle of Passchendaele between July and November 1917. The battalion numbers were again severely depleted and by February 1918 they had become known as the 20th Entrenching Battalion.

Details of the actions of the 10th Battalion are very confused. They would appear to have taken part in the Battles of St Quentin and Bapaume in March 1918, then the Battle of the Avenue, followed almost immediately by the Battle of Ancre at the beginning of April. Stephen was initially reported missing and his death was assumed as 12/04/1918. He has no known grave and is remembered on panel 4 of the Memorial at Ploegsteert in Belgium.

Stephen was entitled to the War and Victory medals, and these, along with his effects, were sent to his parents. He is remembered on the St John sub Castro Memorial as well as on the Lewes War Memorial.