Thomas was born in Lewes and baptised at St John sub Castro on 07/11/1880, the eldest son of Edward and Elizabeth Stevens, nee Bailey. At the time his father was the landlord of the Stag Inn on North Street. This seems to have been a temporary occupation as all later censuses show him working in the printing industry, often as a compositor.
By 1891 the family had moved to 8 Abinger Place, and Thomas had two brothers. Some time before 1900 Thomas began work as an outfitter and also joined the 1st Cinque Ports, a volunteer battalion of the Royal Sussex Regiment.

On 07/09/1900 Thomas enlisted as a regular soldier in the Royal Horse Artillery. His army pension papers are available to view and from these and other sources we can get a good picture of his army career.
He was numbered 12203 and attached to ‘L’ battery. On the 1901 census he was listed as a gunner at Woolwich barracks. He remained in the UK until he was posted to India on 08/12/1903. L Battery were stationed at Secunderabad in Madras. They formed part of the large numbers of soldiers stationed in India for defence of the area.

Lord Kitchener undertook a major reform of the army in India at this time and L battery remained on station until 07/03/1906.

On their return to the UK Thomas must have spent time in the Ipswich area as he married Kate Maria Offord in the Burlington Chapel, Ipswich, on 25/12/1906. His papers note the wedding but say ‘without leave’. Since Thomas was an exemplary soldier having just been made up to Corporal and previously gaining two good conduct medals with gratuity, I take this to mean that he had no time off, not that it was without permission.
Thomas and Kate had no children.

The issues surrounding Home Rule for Ireland meant that by 1911 L Battery was stationed in the Kildare area. Thomas and Kate were billeted at 31 Main Street, Newbridge in Kildare. It is not clear how long they were in Ireland.
Thomas re-engaged for a further nine years service in 1912 and undertook a gunnery course at Shoeburyness in February 1914. By August 1914 Kate had returned to Ipswich and was living at 72 Victoria Street and the battery was back in Aldershot where they received their orders for mobilisation on 5th. Thomas was promoted to Sergeant.

They marched to Southampton and boarded the SS Rowanmore on 16th arriving at Boulogne the same evening and disembarking the following day. The battalion war diary notes that there were 5 officers, 200 NCOs and men and 228 horses. They were in action during August before arriving at Néry on the retreat from Mons.

On 01/09/1914 at around 05:00, while watering the horses prior to launching an attack, they were pinned down and bombarded by heavy German shelling with just one of their guns able to return fire for any length of time. They were eventually relieved by reinforcements from other regiments. The battery was all but destroyed, losing all their officers, about a quarter of the men and two thirds of the horses.
Three Victoria Crosses were awarded to the battalion that day, and the one remaining gun is now on display at the Imperial War Museum. The battery was withdrawn from service and eventually arrived back at Woolwich on 19/10/1914. There is no record on Thomas’ papers that he was injured but he did not serve overseas again. 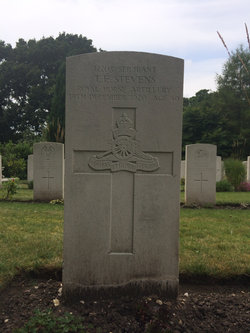 Thomas’ headstone in the Field of Honour
Ipswich Old Cemetery

Thomas was posted to B Reserve Brigade on 16/03/1915, and promoted to acting Quartermaster Sergeant a month later. This brigade was based at Topsham near Exeter and was converted to No.2 Officers Cadet School in early 1917, when Thomas became a Warrant Officer 2nd Class.
He became eligible for demob in January 1919 and was finally discharged ‘permanently medically unfit’ on 08/05/1919. He had served a total of 18 years 244 days and was granted a full weekly pension.

Thomas was entitled to the 1914 Star, the War and Victory Medals and was also awarded a long service and two good conduct medals. He was awarded a silver war badge just a week after his discharge. This was somewhat quicker than the usual time frame.

Thomas moved to live with Kate in Ipswich but was clearly unwell as he was admitted to the Military Hospital and died there on 19/12/1920.

He is buried in the ‘Field of Honour’ in Ipswich Old Cemetery in plot BA 1A 26A where he has a CWGC headstone. Thomas is listed on the Ipswich War Memorial and the St John sub Castro Memorial, but not on the Lewes War Memorial.