Henry William was born in Hartfield in early 1895, the eldest child of Henry Percy and Annie Lancaster, nee Fletcher. Henry Percy was a police constable and by 1901 the family were living at the Police Station in North Road East Grinstead.
By 1911 they had moved to Portland Terrace in South Heighton and Henry William was working as a kiln loader at the cement works. By 1913, when Henry’s sister was born, the family were living in Lewes; almost certainly by that stage they were in 45 Sun Street. By then Henry William was working for the Pearl Assurance Company. 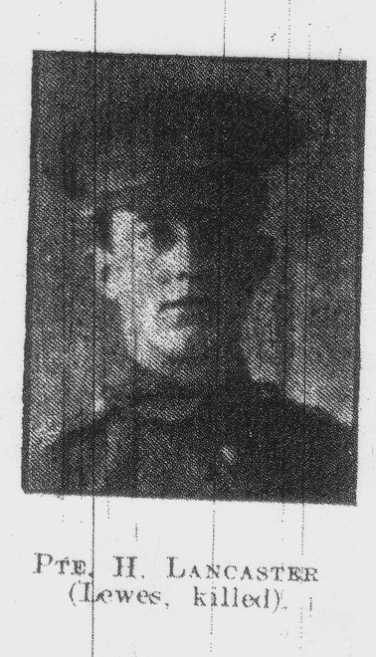 Henry, as printed in the Sussex Agricultral Express.

Henry enlisted in the 1/5 Battalion the Royal Sussex Regiment and was numbered 5/1670. This number is very close to that of George Edward Johnson, which suggests that Henry enlisted in June 1913.

Like George he would have been placed in D Company and the two men clearly knew each other. Henry joined as a drummer although some records list him as a bugler and others simply as a private.

Henry’s army career is essentially the same as that of George Edward Johnson. He was included on the Intercessions list at St John sub Castro in September 1914. He and George arrived in France on the same day, 18/02/1915, and fought together. The only difference being that Henry was killed in the initial charge on the first day of the battle of Aubers Ridge on 09/05/1915.

On Sunday 30th May 1915 a memorial service was held at the Wesleyan Church for three Lewes men of the Royal Sussex regiment who had been killed. The service included parts of the burial service and the eulogy for Henry referred to the ‘gallant charge’ at Aubers Ridge.

Henry was entitled to the War and Victory medals and also the 1915 star. These, along with his effects, were sent to his father as his next of kin.

Henry has no known grave and is remembered on the Le Touret Memorial, with his colleagues, on panels 20 and 21. He is additionally remembered on the St John sub Castro Memorial as well as the Lewes War Memorial.