Alec and Frederick were brothers. Frederick being the elder by a year but they have been researched in alphabetical order, as they appear on the Memorial. Their parents were Albert James and Elizabeth Barbara Thompson, nee Taylor and at the time of Alec and Frederick’s birth they were living in Queen Street. Albert was a general labourer in the timber yard.
By 1901 they had moved to 10 Spring Gardens and by 1911 to 5 Castle Banks. Towards the end of WW1 they were living in 23 Lancaster Street. Albert was still living there in 1939.

Alec was born in the first quarter of 1893 and would have been baptised at St John sub Castro. By 1911 he was working at the Sanitary Steam laundry. This once stood on the corner of Mill Road where it crosses the main road to become Malling Hill, but was destroyed by fire in the 1940s. 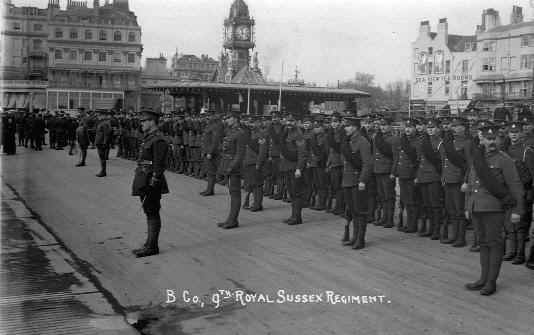 While we cannot be certain Alec is in this postcard, it is very likely.

Alec’s army papers are no longer available but other sources give us quite a bit of information about his wartime service.

His obituary in the local paper suggests he enlisted in the Royal Sussex Regiment in September 1914. He was numbered G/3339, the ‘G’ showing that he enlisted in a general service battalion and that he enlisted for wartime service only. Based on his number and the medal rolls it seems likely that he joined the 9th Battalion in early September. They were formed in Chichester and spent much of 1914 in camp on the South Downs near Brighton where they were often involved in recruitment marches on the seafront.

In June 1915 the battalion moved to Woking for final training before going to France. They left Woking for Southampton and embarked on the SS Marguerite landing at Boulogne on 31/08/1915. It was very wet and the battalion war diary records that the leather equipment supplied by the army did not stand up to the conditions very well.

Within weeks of their arrival in France they suffered heavy losses at the Battle of Loos and the diary comments that, ‘It is regretted that before being launched into such a desperate action steps had not been taken to accustom the men to war conditions.’ 21 officers and 362 men were lost in that one action alone.

A period of relative quiet followed with drills, training and church parades. Reinforcements from the 10th Battalion joined. The weather continued wet and the diary often records ‘nothing of interest to report.’ It is rare for ‘other ranks’ to be named in a war diary, and it is not possible to say when Alec changed battalions. Battalion changes often happened following a recovery from injury. Only around 10% of medical records for this period survive and a soldier would be attached to the nearest suitable battalion when he became fit.

We do know that in November 1917 Alec was part of B Company of the 2nd Battalion. On 13/11/1917 the 2nd Battalion were near Poperinghe. They took over waterlogged trenches which were badly damaged and provided little cover. Over the next two days they were subjected to aerial machine gunning and heavy shelling and 44 men were listed as either missing or known to have been killed. Alec was listed as missing presumed killed on 14/11/1917 but he has no known grave.

Alec is remembered, along with many of his colleagues, on the Tyne Cot Memorial on panels 86-88. He is also remembered on the St John sub Castro Memorial and the Lewes War Memorial. He was entitled to the 1915 Star and the War and Victory Medals. These, and his effects, were sent to his mother.

Frederick was born in Lewes and baptised at St John sub Castro on 04/10/1891. His early life was very similar to his brother and in 1911 he was working as a labourer for a local rope maker. At this stage it is not known who his employer was but the premises would have been close to the river wharves.

He married Edith Pilfold in the last quarter of 1913. A daughter Frances was born in mid 1915 and a son Frederick in late 1916. 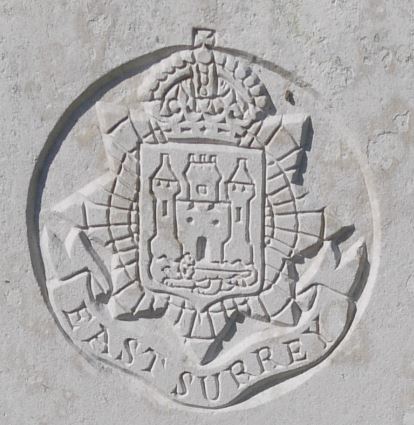 Frederick enlisted in the 3rd Battalion the East Surrey Regiment but the date of his enlistment is unclear as his army papers are no longer available to view. His number, 3/33891, indicates an enlistment quite late in the war, probably in 1916. This would line up with his medal roll index card which shows that he did not enter France until after the end of 1915. His son was born in late 1916 so a tentative enrolment date would fall in early to mid 1916.

The 3rd Battalion was a special reserve and training battalion based in Dover and used to reinforce other battalions as their strength fell. Frederick was transferred to the 8th Battalion some time before November 1917 where he became a member of D Company.

He contracted trench fever and was hospitalised in early November 1917 at Etaples. He was then sent via the 31st Ambulance Train to Calais on 06/11/1917 to convalesce in the UK. Trench fever was a highly contagious fever transmitted by lice and common in the trenches. Men suffered from a very high fever for at least five days and many also had a rash and extreme pain. They needed at least a month to recover. Frederick was still on the injured list on 17th November, around the time his brother was killed. On his recovery Frederick returned to the front.

Life on the front continued as before. The battalion started 1918 in trenches at Hargicourt but moved to Le Verguier, however there was little action except for occasional sniping and skirmishes until mid-March. A big attack was expected and the battalion had been preparing for it since mid-February.

What has become known as the Battle of St Quentin saw huge casualties and the retreat from action. The battalion crossed the Somme, and paperwork and armament that could fall into enemy hands was ordered to be destroyed.
By 31/03/1918 they had arrived at Hailles. The battalion was now reduced to 200 men having lost at least 20 officers and 380 men. Frederick’s assumed date of death is 31/03/1918 but in the confusion of that last week his body was never found or identified.

Frederick is remembered with his comrades on the Pozieres Memorial on panels 44 and 45. He is additionally remembered on the St John sub Castro Memorial and the Lewes  War Memorial.

He was entitled to the War and Victory Medals and these, along with his effects and pension, were sent to Edith.