Ronald and Thomas were the sons of John Beney who is listed on the WW1 Memorial. He had married Mary Louisa Charlotte Laurance in Lewes in 1909 and they had three children, the two boys and a daughter Gladys Mary. John was killed while serving with the Worcestershire Regiment in India in 1919.
In 1911 they had been living at 18 St John Street but had moved to 1 Toronto Terrace by 1919. Mary was reportedly very active in the British Legion in Lewes before she married Frederick Rich in 1928 and moved to Tunbridge Wells. The family had remained in Toronto Terrace until then. Eric and his sister certainly moved to Tunbridge Wells with her, but Ronald, who would have been seventeen, may not have.

It is an interesting speculation why Ronald and Eric should be remembered on a Memorial in Lewes since neither they nor their families had lived there for nearly 20 years. The only close connection I have been able to find is their stepfather’s brother, Henry Rich, a saddler living at The Course.

Ronald was born in Lewes on 14/05/1911. His father’s occupation at the time was as a baker’s roundsman. When Ronald’s mother remarried in 1928 it is not known whether he moved to Tunbridge Wells with her.
In 1934 he was on a voting register in Liverpool with a residential qualification. He married Florence Jeanette Walker at Rocester, Staffordshire in mid 1935 and they moved to live in Mill Street, Rocester. Florence was known as Florrie. In 1939 Ronald was listed as a stone mason. They do not appear to have had any children.

At some point during 1940 Ronald attested into the Royal Artillery and was numbered 1605137, training as a gunner on heavy artillery. He was given leave to attend his mother’s funeral in December of that year and sometime during 1941 was posted to Singapore to join the 3rd Heavy Anti Aircraft Regiment (HAA) forming part of 29 battery.
Singapore was considered to be a strategically vital military base that protected other Commonwealth possessions in the Far East. It was also considered an important target by the Japanese. However the speed and ferocity of the Japanese advance through the Malay Peninsular took people by surprise. Singapore was initially attacked on 8th February 1942 and finally fell on 15th with the surrender of the remaining Commonwealth forces.

Due to the nature of events following the fall of Singapore, records and information about surviving men was hard to collect. Ronald was initially posted as missing on a casualty list dated 28/03/1942. This information almost certainly came from known lists of men who had been stationed on the island. After that there was no further information. 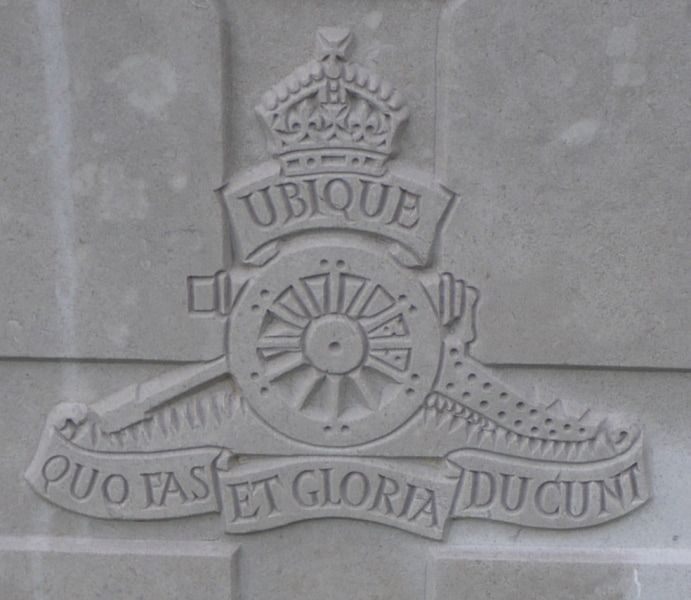 Badge of the Royal Artillery
as depicted on a CWGC gravestone

Florrie must have hoped he was a POW, or had somehow escaped, but she could not have known about the treatment the men received. It is now known that the 3rd HAA originally arrived  in  Singapore  in 1939 and consisted of six guns, two 29 battery and four 11 battery, and were sited near the Anson Road Stadium.
Ronald joined them later. Many men captured from the 3rd HAA were sent to work on the Burma-Siam Railroad.

Following VJ day on 15th August 1945, collecting reliable information took a long time. Florrie heard nothing and finally wrote to the Derby Daily Telegraph at the beginning of January 1946 asking if anyone had heard anything about Ronald, saying that the last she had heard was on 12/02/1942, just 3 days before the fall of Singapore, when he was reported to be in good health.

A month after her letter was published the army posted him as killed in action with a presumed date of death as 14/15th February 1942. He has no known grave,

Ronald is listed on the Singapore Memorial on column 13. His name is included on the Memorial stone in the lych gate of St Michael’s church, Rocester, the church being visible from his home.
He is also listed on the St John sub Castro Memorial and the Lewes War Memorial.

Eric was born in Lewes on 18/12/1913. It is known that when his mother remarried in 1928 he moved to Tunbridge Wells with her and eventually became a Post Office engineering mechanic.
He married Patrica Alice O’Halloran, known as Paddy, in Tunbridge Wells in the 3rd quarter of 1939. The 1939 register lists them living with Eric’s mother and stepfather, with Eric noted as a civil air guard. They do not appear to have had any children.

Eric joined the RAF Volunteer Reserve in Uxbridge and was numbered 1277051. From this number it is known that he joined after May 1940. He was given leave to attend his mother’s funeral in December 1940.
Eric was posted to 7 squadron which was based at Oakington, Cambridgeshire from August 1940 and throughout WW2. This squadron flew Short Stirling Mk 1 aircraft.
Their first offensive mission was to attack Rotterdam docks in February 1941. Oakington had a grass runway and in the winter months this sometimes caused difficulties for the heavy Stirlings. A hard service runway started construction shortly after this mission. 7 squadron was part of Bomber Command and by mid 1943 they were beginning to re-equip with Lancasters. 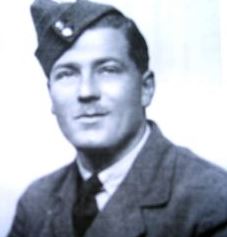 Eric in his RAF uniform

Eric’s usual plane was a Stirling Mk 1 with code MG-T, but on his last flight on 08/03/1943 he joined the crew of a Stirling with serial number R 9270 and code MG-Q.
By now he had risen to the rank of sergeant air gunner. This particular aircraft had a crew of 7 men under pilot Flight Lieutenant John P Trench DSO. In addition to the pilot every other member of the crew, apart from Eric, had been decorated: two with the DFC and three with the DFM.

The objective of this particular mission was to bomb targets in Nuremburg. 335 aircraft took part from a number of airfields. Eric’s flight took off at 19:08. Since there was low haze over the target it is uncertain whether MG-Q dropped her bombs; it is known that not all the aircraft in the flight were able to complete their mission.
MG-Q turned for home but was attacked by German aircraft. Oblt. Hans Auteurieth in an ME 110 claimed the hit at 21.45, his 8th out of his final total of 22 by the end of the war.

Eric’s plane crashed just outside Les Souhesmes, about 10 miles South West of Verdun, exploding and killing the entire crew. Local Frenchmen recovered the bodies and buried them in the local cemetery in a communal grave numbered 6 – 7.