Donald was born in Lewes on 14/01/1920, the only child of Herbert Benjamin and Harriet Kate Cook, nee Wheeler. Herbert and his parents attended the Lewes Wesleyan Methodist Church and there are many references to Donald receiving certificates for good attendance at the Sunday School while he was in his teens.
He was listed at the Pells Boys school in 1933 and two years later went on to study at the Evening Institute, taking classes in English, which he passed, and Pitman shorthand where he gained a theory certificate.
He and his parents lived at 31 New Road and he is listed there on the 1939 register. His father was a vulcaniser and lead burner.

The Military Training Act of 1939 introduced a limited form of conscription, with single men aged 20 – 22 being liable for call up. The plan was that they would undergo six months of basic training before being placed on the reserves list, ready for call up if required. They were to be called Militiamen.

At the outbreak of war the Armed Services Act changed the age limits to 18 – 41 years. Donald seems to have been in this second cohort, as he signed on to the RAFVR at Cardington in Bedfordshire after April 1940 and was numbered 1158471.

On  25th  February  1941  97  squadron  RAF  was  reformed,  after  a  short  break, and began operating from RAF Coningsby. They converted to using Lancaster bombers and in March 1942 re-located to RAF Woodhall Spa. A final move to RAF Bourn took place on 18/04/1943, since their runways were longer.
By now Donald had become a flight sergeant with 97 squadron, who formed part of Bomber Command. 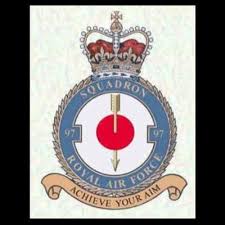 On 14/01/1944, his 24th birthday, Donald and his crew of seven men took off at 16.50 in a Lancaster Mark III, serial number JB 726 marked OF-Y. Their intended target was Brunswick, but no specific flight plan has survived. This was the first raid on Brunswick and the flight had been tracked by the German radar from the English coastline.
Reports from other aircraft on the flight note that many German planes entered the stream over Bremen, with a number of hits recorded. Although it is not made clear, this is likely to have been on the outward journey, as the stream was also tracked and more hits recorded on its return journey.

It is not known whether JB 726 had been able to drop their bombs, but from the few remains of the aircraft ever found it would suggest that it was still fully loaded when it crashed.

Donald, along with his crew, were reported missing and assumed to have crashed, although the crash of this aircraft was not recorded on any of the other aircrafts’ logs. Some years later one member of the crew was identified when those buried originally at a small cemetery at Konigslutter, ESE of Brunswick, were re-interred at Hanover. No other members of the crew have so far been identified.

Although his parents were informed that Donald was missing, no more was heard until the end of 1945 when they were told he was now presumed killed during the raid on Brunswick.
The local paper reported in November 1946 that Donald’s mother had purchased two brass vases in memory of him and another ex-member of the Methodist Sunday School, to be displayed and used in the church.

Donald is remembered on the Runnymede Memorial on panel 227 and the International Bomber Command Centre Memorial in phase 2 panel 147, as well as at St John sub Castro and on the Lewes War Memorial.