Dennis was born on 18/01/1920, the son of George William and Gladys Evelyn Moppett, nee Gillett. He had two younger sisters, Sheila Rosemarie and Felicity Rosemary. Dennis’ father had been born in Southover but following his marriage he moved to 6 Abinger Place.
Dennis attended the County School and was an enthusiastic member of the Crusaders’ Union. He worked as a clerk for the Sussex Rural Workers Insurance Company.
The family were all very involved in life at St John sub Castro. 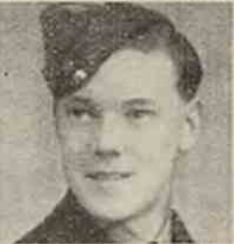 Dennis volunteered into the RAFVR at Uxbridge shortly after May 1940 as a leading aircraftsman, and was numbered 128149. He was posted to Singapore in May 1941 and became part of 151 Maintenance Unit based at RAF Seletar.

A number of squadrons were based there, but with the worsening situation Dennis’ unit was disbanded on 10/02/1942 and evacuated to Java.
Although the Japanese kept some records of men injured and captured they are minimal and most information comes from interviews with prisoners of war released in 1945.

It would seem that Dennis was taken prisoner by the Japanese on 08/03/1942.
Initially held at Java camp he may also have been taken to Ambon, Celebes and Muna camps.
One record for 1944 that has been translated from the Japanese gives his POW number as either 5703 or 1179 and a location as Djawa (Java) camp.

Dennis kept a secret record of his time in the camp and some of these letters have been published by David Arnold in ‘Seventy Years – a Tapestry of Time’.
More details may be found on this link:  In Some Corner of a Foreign Field

A fellow member of 151 Maintenance unit, Edwin Boyce, who endured the same conditions as Dennis, has written on the BBC WW2 People’s War website so we are able to fill in a few more details of life in Singapore and afterwards.
The unit had travelled out to Singapore via Durban and initially life was good, until the attack on Pearl Harbour and the build up of Japanese forces. Edwin gives details of the Japanese attacks on Singapore and how the men coped with incessant daily bombings.

After the disbandment of the unit they were evacuated in a convoy of three vessels, escorted by the cruiser Durban, eventually arriving at Batavia, now called Batauia. Java fell to the Japanese within eight days of their arrival and any servicemen who had not been evacuated from Java were soon rounded up and transported to Surabaja to build an aerodrome. The rest of Edwin’s account is very harrowing, and describes the horrific conditions in which the men were kept, and the work they were forced to do.

Dennis’ death was recorded as 06/01/1945 at Haroekeo. His cause of death is listed as a combination of Beri Beri and Malaria. Malnutrition would also undoubtedly have been a contributing factor.
He would have been buried by his fellow camp inmates after they returned from a work party. He was originally buried at a place called Raha Cemetery in plot K B 9.

Following the defeat of the Japanese and the release of prisoners, all those men buried in these small outlying cemeteries were exhumed and re-buried, with honour, in the Ambon War cemetery.
Dennis was re-interred there on 25/01/1946 in plot 33.E.5