Stanley was born in Lewes at the end of 1906, the youngest son of Christopher George and Elizabeth Mercy Olliver, nee Scrace. His mother was known as Polly within the family. They were living at 12 Eastport Lane in 1911 and his parents remained there for some years. Christopher was a painter.
Stanley sang for a brief period in the choir at Southover and, aged 12, started work at the Lewes Co-op. By 1940 he had risen to be in charge of the provisions department at their central premises. He was also a member of the Borough Bonfire Society.
He married Flossie Henrietta Lee in 1932 in Lewes and a son Raymond was born the following year. He was their only child. They lived at 24 Horsfield Road. 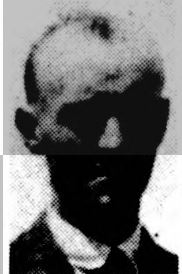 Stanley, as printed in the Sussex Agricultural Express

At the outbreak of war Stanley joined the Home Guard. He was part of No. 4 Patrol of the 5th platoon. He was called up at the end of July 1941 and joined the Royal Army Service Corps as a driver, numbered T/279703. This number indicating that this was a Territorial unit.
The RASC provided transport and supply across the country and Stanley would have had much to offer. He was sent to Aldershot for training, probably at the headquarters at Buller Barracks. This initial period of training would have involved driving lessons on some of the large lorries.

We do not know what happened but just three months later on 21/10/1941 he died at the Cambridge Military Hospital in Aldershot. His death was registered in Aldershot. A notice in the local Lewes paper thanked, among other people, the staff at the hospital, so it is possible that he may have been there for a while.

Stanley was clearly a well respected man in Lewes, as in addition to the report of his funeral there are several mentions of him in the local paper in the weeks following his death, including a glowing report from the Co-operative Society at their half-yearly meeting in November.

Stanley’s funeral was conducted by the Rector of Southover and he is buried in Lewes Cemetery in Section B grave 85.

His name is inscribed on the St John sub Castro Memorial, the Lewes War Memorial and also the Memorial at Southover.