Claude was born in Sunderland on 15/11/1896, the third child of Louis and Eleanor Ridley. He had a privileged upbringing in London attending St Paul’s school and then moving, as a cadet, to Sandhurst College.
At the outbreak of WW1 he was awarded a temporary commission to the Royal Flying Corps but turned it down in favour of a full commission to the Royal Military College Sandhurst, from which he joined the Royal Fusiliers. He retained his interest in flying and gained his flying certificate before moving to the RFC as a 2nd Lieutenant in 1915. 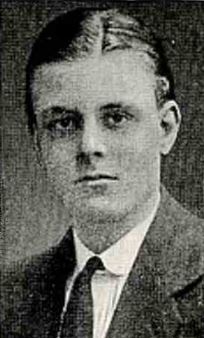 Claude, as printed in War Illustrated
following the award of his MC in 1916.

He joined 3 Squadron and engaged in numerous battles with the German flyers. He was wounded in the foot over France in September 1915 and was returned to the UK to convalesce. As soon as he was fit he was posted to the London defence airfield at Joyce Green near Dartford where his role was to take on the Zeppelins – a role he was particularly successful at.

He was awarded the MC for ‘conspicuous gallantry and good work during the Zeppelin raids’ and was gazetted in May 1916.

A move to 60 Squadron followed where he became an expert at flying spies into German occupied territory at night. However, one particular flight, on 03/08/1916, nearly ended in disaster when a field next to the one he had reconnoitred earlier in the week had, in the meantime, been taken over as a temporary German airfield. Additionally, having managed to land undetected, he was unable to take off due to a fault with his plane.

The spy he had managed to drop off obtained money and clothes for him, and he set off to return to the UK on foot. He spoke no French or German, but documented anything he felt was useful to British Intelligence.
This included details of the new airfield next to where he had landed and others he saw; German aircraft movements; how a crashed British plane crew were dealt with; and details of how he managed to escape through occupied Belgium to the neutral Netherlands and reach the UK on 13/10/1916.

After the war it was recorded that of the 115 men from his squadron who had been wounded, captured or killed on similar missions he was the only one to escape. For this mission he was awarded the DSO.

Due to his actions while on the run he was at risk of being shot as a spy if he returned to France so, aged 19, he returned to the defence of London and was given command of B flight 37 Squadron at its new base at Stow Maries in Essex. He was mentioned in despatches by General Haig in January 1917, and mentioned again several more times.

After the war he was promoted to Squadron Leader in January 1925 and in June the same year married Lillias Elizabeth McAlpine at St Mark’s in Audley Street. Guests included 3 Air Commodores and Valerie Lloyd George, the granddaughter of the former Prime Minister, who carried the bride’s train. The reception was held at Claridges. Claude was placed on the retired list in 1928 and he and Lillias moved to Green Farm at Smallfield where three children were born. They lived there until 1935 when they moved to 6 De Warenne Road, ‘Bleak House’.

On the outbreak of the Second World War Claude was recalled to service in 1939 and held a number of positions including Commander of Leeds University Air Squadron. The 1939 register records him staying at a hotel in Harrogate while Lillias was back in Lewes with the children.
He died of natural causes on 27/06/1942 while off duty and staying at the Dorchester.

At his request he was buried in Stow Maries churchyard, within sight of the southern end of his first aerodrome. There are a number of plaques and memorials to Claude, including a blue plaque placed on his family home in Sunderland in 2016.
Locally he is remembered on the St John sub Castro Memorial and the Lewes War Memorial.