Albert was born in Birmingham on 23/12/1916, the son of Albert and Mary Ann Ellen Pugh, nee Kilmister. At the time they were living at 11 Clifton Grove, Miller Street, Ashton. His father worked as an iron moulder. Albert was their only son, although a sister was born and died in 1920.

Albert enlisted in the Royal Engineers in Birmingham on 23/12/1934, his 18th birthday, suggesting this was a career move on his part. He was numbered 1870777.
It is not known how he met Audrey Ethel Day but they married at Eastgate Baptist Chapel on 15/03/1942. Audrey lived in North Street and her father ran an oil and hardware shop. He was also a well known member of the Lewes Miniature Rifle League.
Following their marriage Audrey lived at 44 Western Road, but whether Albert was able to live there as well for any length of time is not known. Eventually Audrey’s parents moved next door. 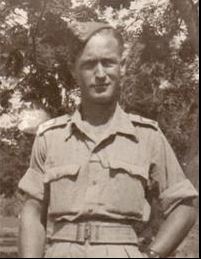 Albert in uniform, from a family tree on Ancestry

Albert was a member of 629 Field Squadron of the Royal Engineers and rose from being a sapper to a lance corporal. This squadron was originally the 9th Squadron but was re-designated on 01/09/1943. From December 1943 they were based in Guildford but had leave over the Christmas period. On their return to barracks training began in earnest in the run up to D Day.

A published history of the Sappers explains what happened on D Day itself.

629 Squadron assembled at 5 am on 6th June 1944 to embark on the landing craft, something they had practised many times. They crossed to France arriving at Sword Beach around 8 am.
What they hadn’t expected or practised for was the small arms fire and mortars that they encountered. Since D Day had been delayed due to bad weather, the tide was at a different level from what had been expected, meaning the landing craft were not able to get as close in to the beach as they had practised for. Many of the men had to swim ashore with their heavy equipment. 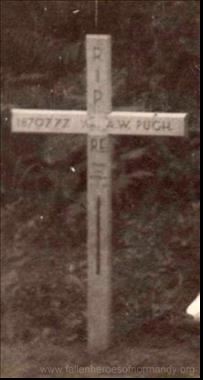 The simple wooden cross erected on Albert’s grave before it was replaced
by the CWGC headstone.
From a family tree on Ancestry.

Their role was to clear obstacles from the beach ahead of the infantry landings. These obstacles could be anything from barbed wire and large stones to mines attached to partly submerged weights.

It is not known how Albert met his death, his RE tracer cards simply say ‘Killed in Action, NW Europe’.

Along with many men who died on D Day and on the push towards Caen, Albert is buried in Hermanville War Cemetery, which  is  located  not  far  from Sword Beach.  Albert is in grave I A 20.

Albert is remembered locally on the St John sub Castro Memorial and the Lewes War Memorial.