Joseph was born in Liverpool in mid 1919, the son of Joseph and Winifred Pasquale, nee Tunney, but always known as Joe. He was educated there and lived in Liverpool. His grandfather, who had been born in Italy, was a street organ player and the whole family was involved in his performances. Little is known about Joe’s early life and he is not listed on the 1939 register. 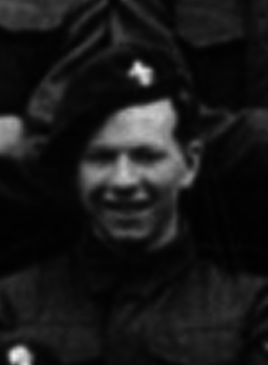 Joe enlisted in the Royal Army Medical Corps (RAMC) and was numbered 7359503. He rose to become a lance corporal. The RAMC is a specialist corps within the army which provides medical services to army personnel. As a non-fighting arm, under the Geneva Convention they may only use what weapons they carry in self defence. Units of the RAMC  are present at all  military engagements, dealing with the sick and wounded.

In the planning for the D Day invasion it was realised very early on that the number of casualties was likely to be high, and plans were drawn up to ensure medical teams were among the first to go ashore.

Joe was seconded to 4 Commando Battalion. From June 1943 they started a new round of training. Following mountain warfare training in Scotland they moved to Sussex and were split into six troops. Two were billeted in Seaford, two in Newhaven and two in Lewes. Joe was in C troop.

Training was non-stop. Night assaults, live firing practice and simulated landing exercises using the newly designed landing craft took place along the coast, with tactical manoeuvres practised on the Downs. It is not known how involved Joe would have been with these, bearing in mind he was from a non-combatant force, but he clearly needed to know how to get himself and his equipment ashore safely during the invasion, and under fire.

On 6th June 1944, D Day, 4 Commando were among the first groups to come ashore in France, landing on Red Queen beach, which was part of Sword beach. Their objective was to capture the guns and a battery at Ouistrechan before moving on to relieve the 6th airborne division who had captured the Orne bridges. As expected, from the moment they landed they came under heavy fire and of the 500 men of 4 Commando around 100 were killed. It is recorded that the medical post was set up but Joe never reached it being killed instantly when a mortar exploded near him on the beach.

Joe was buried in the Hermanville War Cemetery along with the many casualties from this section of the invasion. He is in grave I J 10. His name is inscribed on the St John sub Castro Memorial, the Lewes War Memorial and his parents gravestone in Liverpool.

Joe should not be confused with another J Pasquale of the RAMC who was also attached to
4 Commando. He was a private and was taken prisoner, spending some years as a POW.

Joe had married Jean Marion Lucille Carter in Lewes in late 1943. Jean was the daughter of William Edward and Mabel Carter who were living in Eridge Green, Landport in 1939.
Jean remained living in Lewes following her marriage. She gave birth to a son, whom she named Joseph William, on 21/07/1944 just six weeks after Joe’s death. He was baptised at St John sub Castro on 25/08/1944 with his father recorded as a member of the RAMC 4 Commando.