Harold William was born on 27/01/1918, and baptised at St John sub Castro on 19/05/1918. No father is listed on the baptismal record, indicating that his mother Elizabeth was not married. Her address was given as 3 St John Street. She was the daughter of Joseph and Elizabeth Ellen Newnham. The newspaper report of Harold’s death records him as William so it may be that this is how he was known within the family.
The 1911 census records Elizabeth as a nursemaid. By 1939 she was working as a live-in domestic help for the Cole family at Weald View, The Avenue. Mr Cole was the commercial manager of the Phoenix Iron Works.
Her brother Alfred, Harold’s uncle, was running the Cliffe Fish Shop in Cliffe High Street.

Harold made a career choice and joined the Royal Navy at the end of 1938. He was numbered P/SSX 24399. The ‘P’ shows that he joined in Portsmouth, and the ‘SS’ that he was a seaman on a short service contract of seven years, with a further five years in the reserves. The X was added to all numbers issued after the new pay code of the early 1930s was introduced.
On a short service contract Harold would not necessarily have been entitled to a pension when he left the service. The reserves were only called upon in times of need, or if they had particular skills that were useful in peacetime and Harold would not have expected to be at sea longer than his initial seven years, unless he chose to extend his term of service.

He would have joined as an Ordinary Seaman (OS) and had an initial training period before being assigned to a vessel as part of the crew. We know that he was listed as an Able Seaman (AB) when he died.
Under normal circumstances promotion from OS to AB takes anything from one to three years so William must have shown some aptitude to progress so quickly. He is likely to have served on several vessels before taking his written test for AB. His naval papers will show every vessel and any promotion, however due to the 100 years rule these are currently only available to family members. Had he survived he would have received his own copy when he left the service. The time frame outlined above is also born out by his non-inclusion on the 1939 register which was taken on 29/09/1939. He was very likely at sea on that date and service men are rarely included as it was considered a security risk. 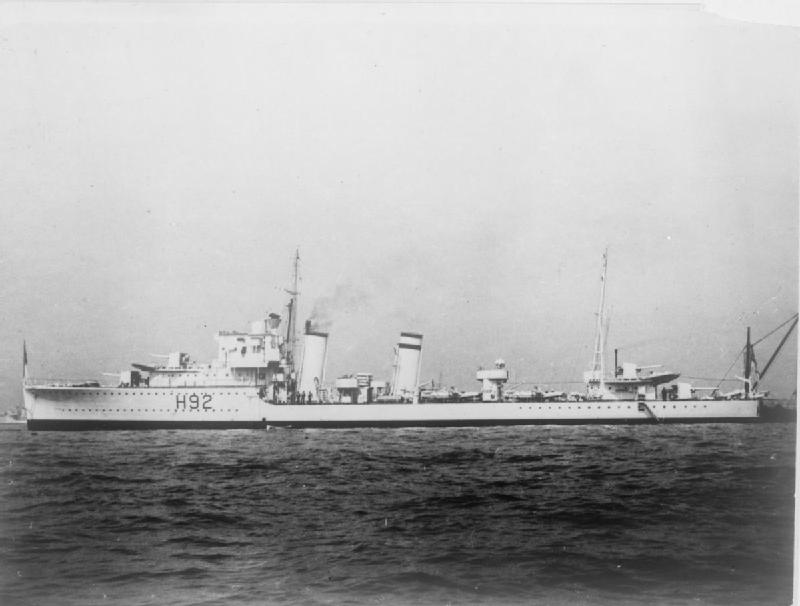 What we do know is that Harold joined HMS Glowworm and was on board in April 1940. She was a ‘G’ class destroyer launched on 22/07/1935 captained by Lieutenant Commander Gerard Broadmead Roope and with a full complement of 150 men.
Shortly after the outbreak of the war she was involved in the escort of local shipping in British waters. She was damaged in a collision with a Swedish ship and taken to a commercial repair yard in Hull at the end of February 1940. Many of the crew were given leave and it is known that Harold was on leave in Lewes in mid-March.
With her repairs complete she was transferred to the Home Fleet at the start of the Norwegian Campaign and left Hull on 20th March to sail to Scapa Flow to rejoin the flotilla.

On 5th April she was providing cover for mine laying operations off Norway as part of Operation Wilfred. She was detached from the covering convoy in an attempt to pick up a man lost overboard. This left her at some risk.
On the morning of 08/04/1940 HMS Glowworm encountered several German destroyers on their way to land troops at Trondheim as part of their campaign to invade Norway. She opened fire and the German destroyers radioed for help from the cruiser Admiral Hipper who in turn attacked Glowworm.

Badly damaged by the encounter she still managed to fire her torpedos at the Hipper. Although he recognised the ship was fatally damaged, Lieutenant Commander Roope ordered a sharp turn to starboard in order to ram Hipper, causing severe damage to her starboard side and holing her in several places. By now Glowworm was on fire and her boilers exploded at 10:24.

In all 111 men were lost. 39 men were picked up and taken prisoner by Hipper, of whom 6 died later from their injuries. Hipper was sufficiently badly damaged that she had to return to her base for emergency repairs.
For his actions Lieutenant Commander Roope was awarded a posthumous VC, the first to be awarded during WW2.

Harold died in the boiler explosion. Newspapers up and down the country reported the events, naming any local men who were believed missing. The Sussex Agricultural Express in their issue of 19/04/1940, naming Harold as William, listed him as among the missing.
Official notification of the deaths of the crew by enemy action was received at the Admiralty on 11th May and they issued a casualty list at the end of May.

Harold’s name is recorded on panel 39 column 1 of the Portsmouth Naval Memorial on Southsea Common, as well as on the St John sub Castro Memorial and the Lewes War Memorial.