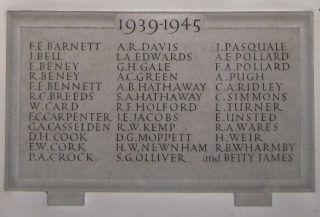 In April 1947 a committee was set up in the parish to look into the form of a Memorial to the Fallen of WW2. The committee members were Mr C Ewell, the churchwarden; Mr E C Russell; Miss M Walker and Mr F W Jones, who was also the honorary secretary. They set up a War Memorial Fund, and a house to house collection within the parish raised £116.
At the beginning of December a follow up public meeting, chaired by the Rector the Rev Langhorne, was held at the church hall. Much praise was expressed for the amount raised. Subscribers had been asked what form of Memorial they felt was appropriate and these were all considered at the meeting.

The decision was taken to fund a tablet that mirrored the WW1 tablet, and to inscribe on it the names of those connected with the parish who had fallen during the war.
A further decision was that any funds left over would be used to purchase a suitable clock to be placed inside the church with an inscribed brass plaque placed beneath it.
The secretary was asked to keep the funds open to the end of the year in case anyone else wished to contribute.

The stone was dedicated by Rt. Rev Geoffrey H Wardle, Bishop of Lewes, on Sunday 25/04/1948 at the evening service. Prior to the dedication Mr H J Holford, a member of the choir who had served in the Royal Navy during the war, had the honour of removing the Union Jack which had been used to cover the Memorial. His brother is named on the Memorial. The local paper, the Sussex Agricultural Express, also recorded that the names of several ex-members of the choir were inscribed on the stone.

The WW2 panels were not added to The Lewes Town Memorial until 1981. All the names from St John sub Castro are included.