Ronald was born on 09/10/1919 and baptised at St John sub Castro on 02/11/1919, the son of Harry and Elizabeth Ann Breeds, nee Bull. At this stage little is known about Ronald’s early life, but his mother died in early 1939. According to the census his parents had lived at various addresses in Lewes: ‘behind the White Harte’; 12 Green Wall; 15 St John’s Terrace; and by 1939, 49 St John Street.
His father also had a variety of jobs: a railway platelayer, general labourer, and in 1939 a horse driver for the Borough Council.
The 1939 register lists Ronald living with his widowed father and younger brother Frank. Ronald was a milk roundsman working for Uridges of Southover.

Information on Ronald’s army career is also sparse. It is known that he was a private in the 4th Battalion the Royal Sussex Regiment, with the number 6403035. The 4th Battalion was a territorial force initially used for civil defence, but in 1940 they were combined with the 2nd and 5th Battalions and sent to France as part of the British Expeditionary Force (BEF), being based on the French/Belgian border. Suffering heavy losses they were evacuated from Dunkirk and continued their civil defence duties in the UK. 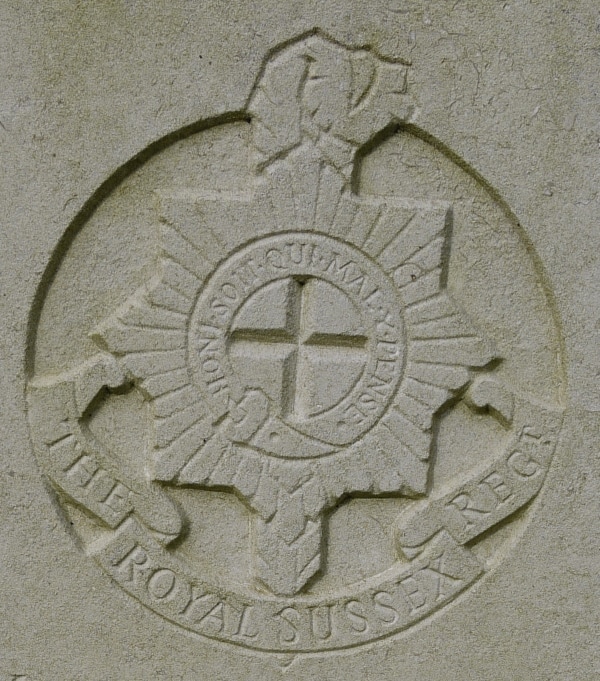 In May 1942 they were sent to North Africa and were involved in the battle of Alam el Haifa. Ronald was reported missing during the battle, and subsequently his presumed date of death was given as 28/10/1942.
He has no known grave and is remembered on the Alamein Memorial on column 61.

Ronald is also remembered, with all Royal Sussex Regiment soldiers who have fallen, in St George’s Chapel in Chichester Cathedral, and additionally on the St John sub Castro Memorial and the Lewes War Memorial.

By the date of his death Ronald’s father had moved to Seaford but his paternal uncle still lived in the St John sub Castro area of Lewes.