Albert was born on 10/10/1913 in Lewes, the son of Albert William and Minnie Davis, nee Burgess. At this stage little is known about Albert’s early life except that he was a prominent member of the Wanderers Cycle Club. His parents lived at 5 Talbot Terrace and his father was listed in 1939 as a warehouseman.
Albert married Winifred Ann Furnell at Offham in mid 1937 and they moved to live with Albert’s parents in Lewes. They did not have any children.

Albert joined the Royal Marines and was numbered PO/X100583. The PO indicating that he was paid from Portsmouth. In 1944 he was stationed in Portsmouth, but at this stage it is not known what his duties or previous service entailed. He had a weekend leave in early 1944, but when he returned to Eastney barracks in Southsea his roommate said that he was very disturbed. He was given a further four days compassionate leave but on his return was even more depressed. 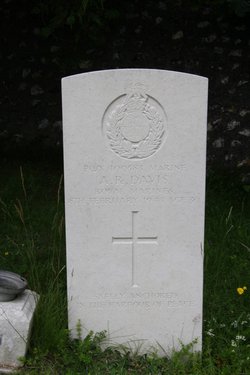 He was found on the morning of 08/02/1944 near one of the air raid shelters at the barracks with a gunshot wound to the head. An inquest revealed that he had discovered letters written to his wife from another man. Things were said to have been patched up and she was coming to see him in Portsmouth the following weekend. The verdict of the inquest was ‘a self inflicted bullet wound while the balance of his mind was disturbed’.

Albert is buried in the Lewes cemetery in section 5 grave 2. He is additionally remembered on the St John sub Castro Memorial and the Lewes War Memorial.